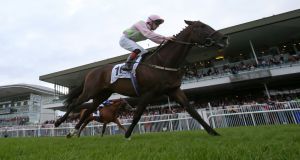 Galway is famous for its betting so there was widespread delight the 7-2 favourite Riven Light kept Tuesday’s big money pot in a stewards’ inquiry.

But no one doubted Robbie McNamara’s first festival success as a trainer trumped everything for feel-good factor.

The man who twice won Galway’s big amateur prize for Dermot Weld, and was twice the festival’s leading National Hunt rider, saddled the Weld cast-off Cascavelle to win a seven furlong handicap at 9-1.

McNamara’s luminous riding career contained close to 150 winners but it came to an end in April 2015 with a crashing fall at Wexford which left him paralysed.

Always popular, McNamara’s resilience since that accident has made him an inspirational figure and sustained applause greeted him in the winners’ enclosure he visited many times as a rider.

“I preferred the buzz of riding a winner but I find the everyday life of a trainer just as good,” he said as he brought to an end a frustrating run of placed efforts by his near 20-strong Curragh-based string.

“They’ve been hitting the post but even though this horse was only about 85 per cent fit I still thought he’d take beating. He has plenty of class and he can only improve,” McNamara added. “He’s in my colours so if anybody else want to take him I’ll ship him on – but only to stay in the yard!”

Cascavelle was ridden by Billy Lee who later emerged best of another half length margin when the 4-1 favourite Serefeli pounced late to win a mile handicap for trainer Peter Fahey.

Willie Mullins won his second festival feature of the week when the well -backed Riven Light powered though the Quinn BMW Mile field to win under Declan McDonogh.

The winner helped make a crucial gap for himself inside the final furlong in an incident with Marshall Jennings and he then made contact with the runner-up Hibou.

The stewards gave McDonogh a four-day ban for careless riding but left the result alone. It was a fourth win in the race for the former champion jockey.

“I had to sit and suffer a little but it’s typical Galway, getting a little messy with horses getting a little tired,” he said. “But I was a good winner. The gaps were there. The outside horses were pushing in and there was plenty of room for me to go.”

Mullins was represented by his son Patrick who said: “It was a superb ride by Declan. He said there would be pace and Ruby [Walsh] advised him to ride for luck. It’s great the horse is finally showing what he shows at home. I think he probably wasn’t staying over hurdles.”

One man already assured a 100 per cent success rate for the week is Noel Fehily whose sole festival ride, Three Wise Men, broke his duck over fences at the seventh time of asking in the Beginners Chase.

The cross-channel based Cork rider disobeyed instructions too, leading after the first and ultimately having three lengths in hand of Bamako Moriviere.

“He did exactly the opposite to what we’d agreed in the ring. But plans are made to be broken!” said trainer Henry De Bromhead who saddles six in Wednesday’s Plate, including one of the favourites, Balko De Flos.

“But you don’t tie these guys: win, lose or draw he did the right thing.”

For the second day in a row, Joseph O’Brien saddled a first race winner for JP McManus as last year’s St Leger third, Housesofparliament, made it third time lucky over flights.

Fethard trainer Joe Murphy continued his good run with Shekiba proving a game winner of the juvenile fillies maiden. She faces a step up to Group Two class now against a potential superstar in September at the Curragh.

“Her next run will be the Debutante. I think she’s good; definitely a Group filly,” Murphy said.