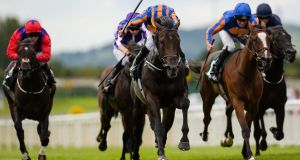 Aidan O’Brien is likely to look at the Middle Park Stakes or National Stakes next for Sioux Nation after the Royal Ascot winner got the better of Beckford in a cracking renewal of the Keeneland Phoenix Stakes at the Curragh.

O’Brien fielded four in his challenge against the previously unbeaten Beckford, trained by Gordon Elliott.

Sioux Nation had won the Norfolk Stakes over five furlongs last time out and was the pick of the O’Brien team by Ryan Moore.

Beckford was sent off the 15-8 favourite but with a furlong to run Sioux Nation’s superior mid-race speed enabled him to go a length clear.

To his credit Beckford was reeling him in all the way to the line under Declan McDonogh, but the post came too soon for him, with Sioux Nation (2-1) holding on by half a length to give O’Brien an incredible 16th win in the six-furlong Group One contest.

O’Brien said: “I think his turn of foot won it, he travels very well and quickens very well — even though he’s a big horse, he’s got a lot of speed.

“Every run this year he has got better and has been coming forward. Ryan was delighted with him. He’s a big horse and he’s still progressing.

“He has plenty of speed. I said to Ryan ‘how far will he stay’. Obviously we saw him in Ascot and he said he’d be very comfortable at five but could still get seven this year because he’s very relaxed.

“Those kind of horses, with that kind of pace, the better the ground the better it is for them. The ground would be a help and you probably wouldn’t want to run him on soft.

“We’ll see how he is, but you’d be thinking about the Middle Park and you could have a look at the National Stakes or Dewhurst.

“It depends on where the ground is, as you wouldn’t run him on bad ground. Six or seven furlongs, he’ll be very happy.

“He’s by Scat Daddy, like Caravaggio. I don’t know if we’ll stretch him to seven this year, if we did we could come here for the National Stakes and if we didn’t he could go for the Middle Park (at Newmarket).

“He’s a horse to look forward to.”

When asked if he could be a Breeders’ Cup contender, O’Brien said: “He’d have no bother, I’d say. He’s big, powerful, rangy and loves fast ground. I’d say he’ll progress as he’s progressed with every run this year.”

Stablemate Actress was third, and O’Brien went on: “She’s progressing all the time and could come back for the Moyglare.

“Every run this year she has got better and better.”

RaceBets gave Sioux Nation a 25-1 quote for the Qipco 2000 Guineas, and Moore — who like O’Brien enjoyed a treble on the day — said: “I couldn’t have been more impressed. I loved him at Ascot, but I think he’s got to have fast ground.

“At Ascot he took me into the race really easy and he did the same today.

“I think he’s a very exciting colt. We knew he was good, but the second is obviously a good horse, it was a good race.

“This lad is a bit bigger than Caravaggio, but I think and hope he’s got a big future.

“He’s the first of our two-year-olds to win a Group One and he’s a Royal Ascot winner, he’s very good.”

Elliott, meanwhile, was upbeat about the future for Beckford.

He said: “We’re really proud of the horse, he ran his heart out. You always want to win in this game, but it was a good horse of Aidan’s that won it and I don’t think our horse lost anything in defeat.

“He was galloping to the line again, and that’s the thing I like about him — we know he will stay a bit further and a bit more ease in the ground would suit him better.

“We’ll see. Declan said he would definitely get seven and he wouldn’t mind a go at another Group One.”

Washington DC (11-4 favourite) finally won his first Group race when just getting the better of stablemate Cougar Mountain in the At The Races Phoenix Sprint Stakes.

A sprinter who has danced every dance in recent seasons, he has regularly come up short against the best but he was a Listed winner early in the season.

Gordon Lord Byron was in there fighting as usual, but Cougar Mountain swept by him only for Washington DC to pounce and give Moore a treble having also won the feature Phoenix Stakes on Sioux Nation.

“He has a load of ability. He has loads of speed for five, but it’s just a little bit hard to produce him over five,” said O’Brien.

“Over six he has a little bit more time to produce him and wangle him through. He just doesn’t want to be in front very long.

“He’s the type of horse we’ll have to turn up (everywhere) as he can be unlucky in a race. He loves coming through horses. I wouldn’t be ruling York (Nunthorpe) out or Haydock (Sprint Cup) after that.”

On the runner-up, he added: “Donnacha (O’Brien) said to go back to six with the horse as you’re stretching him out too much.

“He had some very good runs over six and was only beaten three lengths in the July Cup on only his second run.

“He has plenty of speed and is another horse that things just have to fall for him. If we could go back to that it would be a lot easier for him.”