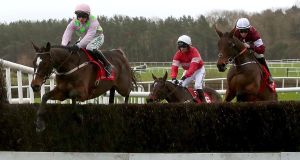 Min recorded back to back victories in Punchestown’s Grade One John Durkan Chase on Sunday and struggled once again for 100 per cent of the spotlight.

That’s because behind the odds-on winner in third was the hugely popular Presenting Percy who put up a very encouraging performance on his return from injury.

Circumstances seemed to conspire against the horse who started favourite for last season’s Cheltenham Gold Cup, not least with regular jockey Davy Russell unable to ride after feeling unwell.

JJ Slevin, who’d won the opener on Anything Will Do, replaced Russell and got Presenting Percy jumping smoothly off a dawdling pace that hardly suited such a proven stayer.

In contrast it was Min’s jumping that left plenty to be desired as he set that pace from last year’s runner up Shattered Love.

A mistake three out ruined her chance and instead it was the 25-1 outsider Hardline who quickened to mount a challenge that briefly took him past Min on the run to the last.

If it was to Min’s credit that he rallied to be well on top at the line there was plenty encouragement too from the way Presenting Percy stayed on in the closing stages.

“It’s great to have him back. His jumping was good and it’s great to see the way he ran to the line. All being well we’ll look at the Savills in Leopardstown over Christmas,” said Presenting Percy’s owner, Philip Reynolds.

Plans are more fluid for Min who was winning for a fourth time in five career starts at the two and a half mile trip.

“He’ll have to jump better whatever trip he goes over,” mused Willie Mullins who also used to train the Durkan’s previous back to back winner, Djakadam.

“I thought it was an unbelievable performance coming after three mistakes. I think he wanted to go faster but it’s hard to judge what’s happening in that wind.

“To come back from what I thought was certain defeat after the second last was very good. He picked up and threw a huge leap at the last and was going away. The jump at the last shows what he had in the tank,” he added.

It was a fifth Grade One success in all for Min whose lot it seems is to always be overshadowed by contemporaries in his own yard.

Within 20 minutes of his Durkan triumph Mullins’s Cilaos Emery stayed unbeaten record over fences with a stylish win in Cork’s Hilly Way Chase.

That catapulted him over Min in betting for the Champion Chase in March although the latter is also a general 8-1 shot for the Ryanair at Cheltenham.

Mullins was also on the mark at Cork when Elimay made a winning debut over fences in a Grade Three Novice Chase.

However he was out of luck in the Beginners Chase at Punchestown as Breaken, who had spread-eagled the field from the start and looked in control, crashed out at the third last. It left the 13-8 favourite Dunvegan to come on his own.

Henry De Bromhead’s runner had to fight hard to hold off the Gordon Elliott pair, Mount Ida and Ard Abhainn, yet was still cut to 12-1 by some firms for the mares novice at Cheltenham.

“We won which was great but she was fairly workmanlike,” admitted De Bromhead who nominated next month’s Solerina Hurdle at Fairyhouse as a likely next target. “We had cotton wool in her ears - I’d say we’ll be pulling that out the next day!”