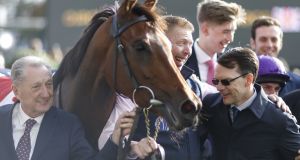 Trainer Aidan O’Brien is congratulated after equalling the record for 25 Group One winners in a season at Ascot on QIPCO British Champions Day. Photograph: Getty Images

Saxon Warrior and The Pentagon are already disputing favouritism for next year’s Epsom Derby and could tussle for the honour of providing their trainer Aidan O’Brien with a world record 26th Group One success at Doncaster this Saturday.

O’Brien equalled Bobby Frankel’s haul of 25 Group/Grade Ones in a calendar year when Hydrangea landed the Fillies & Mares Stakes on British Champions Day at Ascot on Saturday, leaving it to be almost universally accepted it’s a case of “when” and not “if” the Irishman sets a new mark.

The first opportunity a Ballydoyle horse will have to secure a little bit of history could be Taj Mahal in Saturday morning’s Cox Plate at the Moonee Valley track in Melbourne. But since he’s 50-1 to shock Australia’s pride and joy, Winx, the Racing Post Trophy looks a more likely opportunity.

Camelot (2011) and High Chaparral (2001) were two of O’Brien’s seven previous winners in the Doncaster highlight and they proceeded to become dual-Derby heroes the following year.

Saxon Warrior and The Pentagon are already on top of the 2018 Derby betting at 10-1 and O’Brien indicated at Leopardstown on Sunday, where he saddled a hat-trick, that both are in contention to line up in the top-flight event of the year in Britain on Saturday. “They’re the two we’re looking at for the Racing Post,” he said.

O’Brien currently has 14 other entries for the Racing Post but Ballydoyle’s headline acts will be widely expected to take their trainer to a new record should either or both line up.

Both the seven furlong Criterium International and the mile and a quarter Criterium de Saint-Cloud are worth €250,000 and O’Brien has won them on four occasions each in the past.

“It’s all very fluid but we’re looking at something like Threeandfourpence (fourth in the Dewhurst) running in the seven furlong race. But I’ll have to talk to Mrs Stockwell (owner) first,” said O’Brien who was crowned British champion trainer for a sixth time on Saturday.

”For the mile and a quarter something like Nelson could run, and Kew Gardens, and maybe Delano Roosevelt. But it’s very rough at the moment,” he added.

The Irishman currently has 20 horses among the 32 entries for the Criteriuim de Saint-Cloud and 11 possibles for the International.

Some of that juvenile strength and depth will be diverted to Del Mar a week later though as Ballydoyle’s Breeders Cup team starts to take shape.

O’Brien pointed to September and Happily as potential starters for the Juvenile Turf Fillies and he didn’t rule out the Dewhurst winner US Navy Flag, as well as Mendelssohn and Seahenge who finished behind him at Newmarket, from the colts event.

He confirmed Highland Reel will bid to defend his mile and a half Turf crown while Rhododendron and Roly Poly could be split between the Filly & Mare and Mile respectively. He also didn’t rule out Caravaggio making the trip to California for either the Mile or the Sprint.

The Classic has remained elusive to O’Brien over the years and he suggested the recent Group Three Dundalk winner War Decree might take his chance against Arrogate, Gun Runner and the best US dirt horses in the $6 million Breeders Cup highlight.

Found’s brother James Cook made rather hard work of landing 4-7 odds by half a length in a maiden but Kenya earned 20-1 Derby quotes of his own for next year by scoring in the Group Three Killavullan Stakes.

Donnacha O’Brien made all the running on Cork maiden winner who made light of the drop back to seven furlongs and had a length in hand of McMunigal at the line.

”He’s a good, genuine big honest horse and you’d be very happy stepping him up in trip. He handled the ease in the ground well,” said O’Brien Snr who will be crowned Ireland’s champion trainer for a 21st time when the flat season ends at Naas in a fortnight.

Donnacha O’Brien had earlier also booted home Baroness for his brother, Joseph, in a Nursery. The 7-2 winner had almost four lengths in hand of Magic Sea.

However it was Seamus Heffernan, who’d earlier been on board James Cook, that drove the 5-1 maiden, Bound, to a decisive defeat of the 6-4 favourite Cannonball in the Listed Trigo Stakes.

”It’s lovely for her to win a Listed before going off to stud,” the champion trainer said.