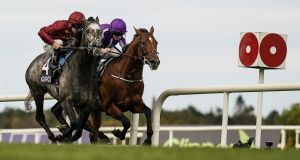 Earlier the other star attraction on the first day of Irish Champions Weekend, Alpha Centauri had been dramatically beaten by Laurens in the Coolmore Matron Stakes.

But that proved no omen for the €1.25 million feature event where it was business as usual between Roaring Lion and Saxon Warrior in the sixth clash of their careers.

For a lot of the straight it looked like Saxon Warrior was set to renew early superiority over his English rival as he shot clear off a slow pace cut out by one of his four stable companions, Deauville.

For more than a moment it looked like Murphy was in trouble on the 8-11 favourite who launched his run from the back on the outside of the field.

The 23-year-old Killarney-born jockey had to throw everything at Roaring Lion to get on terms. But for a colt with form when it comes to hanging under pressure, the John Gosden-trained winner proved ultra-game.

Murphy had only ridden his first ever winner in Ireland earlier on the card on board the Willie Mullins-trained Limini.

He admitted to “learning on the job” about Leopardstown, although a Group One in a sixth different county during his meteoric career added to evidence of how quick a learner the Kerryman is.

“I’d been thinking beforehand how I’d react if he won but this is surreal,” Murphy exclaimed. “Once he got rolling I was always going to get there but I had to really get after him. I haven’t much experience around Leopardstown. I was learning on the job. But I was on an exceptional horse.”

Roaring Lion had to be that to win as the Aidan O’Brien team looked to have controlled the race perfectly.

Fresh from his St Leger victory aboard Kew Gardens at Doncaster – and a dash by chopper and plane to Leopardstown – Ryan Moore grabbed the initiative at the top of the straight.

His young rival conceded it was a tactical race to ride and Murphy added: “The race changed about three times before the turn in. Saxon Warrior got first run and Ryan gave him a great ride. I’d thought this might happen but I had to try and get into a rhythm early and get him relaxed.”

It paid off in the end but it was a close run thing and Murphy’s next top-flight target will be in Toronto tomorrow night when he rides Jessica Harrington Chicas Amigas in a Woodbine Grade One.

That filly has recently been bought by Sheikh Fahad’s Qatar Racing team, which had a perfect outcome to a race sponsored by the Sheikh.

It was a fourth Irish Champion Stakes for Gosden whose son, Thady, represented Britain’s top trainer. He reported next month’s Champion Stakes at Ascot could be next for Roaring Lion if ground conditions don’t get too soft.

Gosden Jnr was full of praise for Murphy and said: “To have his first winner in Ireland and then win a Group One is no mean feat. He and Roaring Lion have gelled incredibly well. They had us all sweating but he’s given him an incredible ride.”

Saxon Warrior could also go to Ascot next month but for the QEII over a mile.

Aidan O’Brien said: “He ran very well. The plan was always to go back to a mile at Ascot after this and that’s where he’ll go, all being well.”

However, Alpha Centauri’s attempt at five Group One victories in a row came dramatically unstuck as the 3-10 favourite came up three quarters of a length short of Laurens in the Coolmore Matron Stakes.

The ‘SP’ of Jessica Harrington’s superstar filly reflected a general presumption that Alpha Centauri had little more than a lucrative gallop in front of her.

Any drama was supposed to be confined to Moore and Séamus Heffernan’s late-late dash from Doncaster’s St Leger in time to ride in the Matron.

The rule states riders have to be present 15 minutes before the ‘off’ time of a race although flexibility is allowed in “exceptional circumstances”.

Moore and Heffernan ran from the helicopter that brought them to the track and were permitted to team up with Magical and Clemme respectively.

In the circumstances the sole English raider Laurens was comparatively overlooked in the prelims but wound up justifying her supplementary entry into the race in style.

Danny Tudhope took over from the injured PJ McDonald and made all the running on the Karl Burke-trained star, who was landing her fourth Group One.

When Alpha Centauri loomed up with her challenge in the straight the script looked set to unfold but for once there was no happy ending.

Instead once Colm O’Donoghue went for everything Alpha Centauri drifted left onto Magical and at the line Laurens was in command.

“She did everything right. She quickened up and went half a length up. But then she lost her action and half-knuckled over for a stride or two,” O’Donoghue reported. “When she recovered she did it a second time.”

Emulating Australia – a beaten 3-10 favourite in the first ‘Irish Champions Weekend’ in 2014 – was not what most in the 14,266 crowd wanted, although it was a spectacular bounce back to form for the winner who was dropping to a mile from a disappointing effort in the Yorkshire Oaks last month.

“We were adamant after the Yorkshire Oaks she didn’t stay. We weren’t going to complicate things so she made the running and made use of her huge stride,” said Laurens’ trainer Burke.

Newmarket’s Sun Chariot could be next for Laurens but the Alpha Centauri team face an uncertain 24 hours on the back of Saturday’s display.

“She got to the lead and took a bad step. Whatever happened she took a bad step and then took another one towards the end,” said Harrington who’d won the opener with Sparkle ‘n’ Joy. “It’s hard to know [if she is sound] as the adrenaline is pumping now.”

Veteran Curragh trainer Kevin Prendergast looks to have a new Classic prospect on his hands after Madhmoon followed his course debut victory with a smooth performance in the Group Two Juvenile Stakes.

The 6-5 favourite ran out a two-and-a-half length winner over Broome and earned quotes of as low as 20-1 for next year’s 2,000 Guineas.

“I think he’s a good horse, certainly the best we’ve had since Awtaad, and he’ll keep us getting up in the morning!” said Prendergast who trained his first winner 55 years ago.

“It was either the National Stakes tomorrow or run today. I was worried about the ground as I thought it was a bit quick but the decision was made and it was the right one,” he added.

Aidan O’Brien doubled up in a pair of Group races, saddling a 1-2 in both the Boomerang Stakes, won by I Can Fly, and Rostropovich’s victory in the Rewards Club Stakes.