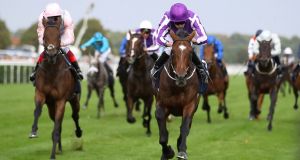 Kew Gardens fended off the late challenge of favourite Lah Ti Dar to give Aidan O’Brien a sixth victory in the William Hill St Leger at Doncaster.

Sent off a 3-1 chance in the hands of Ryan Moore, Kew Gardens was buried in the pack early on as stablemate Nelson set the early gallop in company with Derby runner-up Dee Ex Bee.

They were lining up in behind with half a mile still to run — where inexperience seemed to tell on the market leader — and Moore was eager to push on, assuming control at the two-furlong point.

Lah Ti Dar eventually did hit her stride for Frankie Dettori, but Kew Gardens had already flown, securing his second Group One victory of the season by two and a quarter lengths.

Fellow O’Brien inmate Southern France kept on for third, a further four and a half lengths adrift.

Kew Gardens won the Queen’s Vase at Royal Ascot back in June as well as the Grand Prix de Paris in July and O’Brien was delighted to see the Galileo colt add a Classic to his record.

He said: “We couldn’t be happier with him. He’s a horse that’s progressed lovely.

“We saw what he did in (Ascot) and we were delighted with him in France.

“We always thought he was a horse that would stay well and we thought the distance would suit him.

“He has a lot of class and we’re over the moon really.”

Moore and O’Brien had to dash off to Leopardstown for the Irish Champion Stakes card, but the rider had time to add: “He travelled well and got there easy.

“He’s a very uncomplicated horse with a fantastic attitude and he won it nicely.

John Gosden was not too disheartened to finish second with Lah Ti Dar, as he felt his filly was caught out by her relative lack of experience.

He said: “She ran a great race and as Frankie said, that’s the first real race of her life. She’s only ever seen about one horse before today.

“She was beaten by a proper horse and a proper Leger horse — a Grand Prix de Paris winner and a Queen’s Vase winner. She’s run an absolute blinder and we’re thrilled with her.

“The early pace was a lot slower than we thought it would be. Everyone said ‘oh that’s good, she’ll stay’, and I said ‘actually I’m not sure it’s going to suit her’.

“In the end the best horse won — make no mistake — but I like the way she was closing him down late on. She was getting to him and getting to him.

“There was a period at the three (furlong marker) where you said ‘she’s not going to be placed’, but then she got balanced and organised.

“She’s never raced against other horses before.

“We’ll freshen her up and go for the fillies’ and mares’ race on Champions Day at Ascot and then put her away for next year. That’s the plan.”