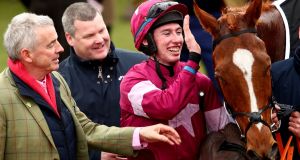 Samcro is likely to make his eagerly awaited return to action at Down Royal in early November – be it over hurdles or fences.

Gordon Elliott’s stable star lit up the novice hurdling division last season, winning his first four starts including an impressive victory in the Ballymore Novices’ Hurdle at the Cheltenham Festival in March.

His fall three flights from home in the Punchestown Champion Hurdle muddied the waters in terms of plans for this season, with Elliott and owners Gigginstown House Stud still considering whether to keep Samcro over the smaller obstacles or pursue a career over fences this term.

Elliott told At The Races: “There’s no decision made yet, to be honest. I’ll have to talk to Michael and Eddie [O’Leary] over the next couple of weeks and make a decision on what we’re going to do.

“I like to start a lot of my horses off up in Down Royal, ground permitting, and that’s where he’ll start off, over hurdles or fences.”

The Cullentra handler also confirmed Cheltenham and Punchestown hero The Storyteller is an intended runner at the same two-day Down Royal meeting on November 2nd and 3rd.

Labaik, who won the 2017 Supreme Novices’ Hurdle at Cheltenham, has been sidelined since finishing fourth in the Punchestown Champion Hurdle the following month and future plans remain up in the air.

Elliott added: “There’s been no decision yet. He’s just back in light work. There’s a few things to be sorted out there yet.”

Death Duty, a Grade One winner over hurdles and fences, missed the second half of last season and has not yet returned to training.

“Death Duty is still not back in. He got a bit of a setback last year,” said Elliott.

“We might have him for the second half of the season, but there’s no big panic with him.”

1 Limerick roar from behind to sink Tipp and start league in style
2 Mike Catt hopes to have Irish backs purring in Six Nations
3 Six Nations: Ireland are contenders but England still the team to beat
4 GAA officials and referees brace themselves as new rules kick in, and this time it's for real
5 Owen Doyle: Creeping professionalism of schools rugby a threat to the game
Real news has value SUBSCRIBE