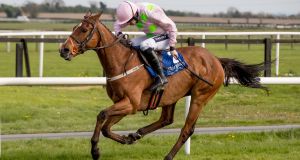 Thomas Hobson: looking for his first victory on the Flat in more than a year when he lines up in the Doncaster Cup. Photograph: Morgan Treacy/Inpho

Talented dual-purpose performer Thomas Hobson will attempt to gain his first victory on the Flat in more than a year by going one better than 12 months ago in the Doncaster Cup on Friday.

Without a win since last year’s Ascot Stakes at the Royal meeting, the eight-year-old bids to set the record straight by giving trainer Willie Mullins, who will also saddle last year’s Melbourne Cup third Max Dynamite and Renneti, his first victory in the Group Two contest.

Assistant trainer Patrick Mullins said: “Thomas Hobson and Max Dynamite have both been a bit below par since coming back from Melbourne, but this looks a lot more open than they have contested so far so we are hoping they can return to form.

“We know Thomas Hobson acts on the track, as he has run well on it before. I suppose he is our best chance and he has Ryan Moore on board, but they are three good horses on their day.

“Obviously Renneti is a bit of a Jekyll and Hyde character. We thought he ran a very good race at Royal Ascot and hopefully he will run like that again. These extreme trips on the Flat seem to suit him, but it all depends which Renneti turns up when the stalls open.”

Jedd O’Keeffe is optimistic the two-and-a-quarter-mile trip will not prove beyond Lord Yeats, who returns to Pattern-race company having finished down the field in the Ebor on his most recent start.

O’Keeffe said “We are going into the unknown trip-wise, but we’d be very hopeful he will stay.

“He’s definitely bred to stay and when we ran him over a mile and seven furlongs in France earlier in the year he had no trouble staying. I remember PJ McDonald saying afterwards we could go as far as we want with him.

“We were thrilled with way he ran in Ebor last time, but the ground was too lively for him to be at his best. He will be a level above that on slower ground. We don’t need it to be soft or heavy, but the slower side of good is definitely preferable for him.”

Saunter already has one notable victory on Town Moor to his name, having captured last year’s November Handicap, and his trainer Ian Williams feels he is well worth his place in the race, which forms another part of the Qipco British Champions Series.

The Alvechurch handler said: “It was soft when he won the November Handicap and probably plenty quick enough for him in the Ebor.

“He’s up in distance, but I wouldn’t have entered him if I didn’t think the trip was within his compass. I’d be happy enough he will stay.

“Stradivarius is spending his million quid and it’s a relatively small entry for the race. It’s a big ask, but I’d be confident of him putting up a reasonable performance.”

Anthony Honeyball expects Jukebox Jive to outrun his big price and leave behind his lacklustre effort last time out at Ascot.

“He’s got a fair bit to find and will be the outsider of the lot, but I’m not fazed by that. He’s a good solid stayer with a very good attitude,” said Honeyball. “We go there thinking he will have more of a squeak than his price suggests and that he will outrun his odds.

“We can’t explain why he ran so moderately at Ascot last time, when we really fancied him to run well and he went off favourite.

“He seems absolutely fine and this was always the plan afterwards. He’d been in good form before Ascot and hopefully he will be more competitive this time.”