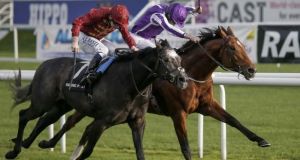 The French Derby winner Study Of Man is set to take on ante-post favourite Roaring Lion in next Saturday’s €1.25 million QIPCO Irish Champion Stakes at Leopardstown.

The mile and a quarter Group One is once again the highlight in what will be the fifth year of “Irish Champions Weekend” which also includes the Curragh next Sunday.

Leopardstown’s chief executive Pat Keogh said on Friday the Flaxman Stables team which own Study Of Man have confirmed their intention to travel to Leopardstown.

“The whole idea all along has been to make this an international event and it’s great that another French Derby winner is going to be here at Leopardstown. Alan Cooper [Flaxman spokesman] has been on to say he’s coming,” Keogh said.

Study Of Man won the French Derby in June but could finish only third on his reappearance in Deauville last month. He is a general 12-1 shot for next weekend.

Keogh also confirmed that free entry for third-level students will be available at the first leg of the Irish Champions Weekend.

“This is a strategy we’ve had from the first year to encourage younger people to come racing, and reduce the average age, and it’s definitely working.

“Students in their last year of college are a year away from being the most attractive audience you’d want. So we’re working very hard to retain them and get them to come back again.

“We obviously want people of all ages. But you have to look to the future and this is part of a strategy to make sure the next generation is exposed to top-quality racing. And it’s very noticeable we are reducing the average age at Leopardstown,” he said.

The initiative is part of a sponsorship deal with Spin radio station and Keogh rejected any suggestion of it being a way to artificially boost attendance figures.

Full admission price next Saturday will €35 although it is currently available to book at €30. Normal raceday admission at Leopardstown is €20.

“I can see why someone might say that but I don’t accept it. It’s been sponsored every year. And from where I’m sitting we’re trying to do something different and encourage young people to come racing here,” he added.

The biggest attendance at the Leopardstown leg of Irish Champions Weekend came in 2016 when an official crowd of 14,550 was reported. Last year that dropped to 13,689.

“You might have an avid student racegoer who’s coming along themselves but bring two or three mates, and asking them to pay, they might not be willing to do that,” he added. “They might be more inclined to come along when its sponsored.”

In other news, Gordon Lord Byron’s 2013 success has been the sole Irish-trained victory in the Group One Haydock Sprint Cup over the last 45 years.

Tom Hogan’s veteran has been a stalwart presence in Saturday’s cross-channel feature but this time settles instead for a three-horse race at Navan less than a couple of hours beforehand.

It leaves both Aidan and Joseph O’Brien to try to break fresh ground when respectively saddling Gustav Klimt and Speak In Colours.

The three-year-olds are among the outsiders for a historic event which sees Godolphin’s Harry Angel try to emulate Be Friendly (1966-67) by winning it back to back.

Other proven Group One winners in the race include Brando, The Tin Man and Eqtidaar but O’Brien Snr hopes a drop in trip could help Gustav Klimt finally crack the top-flight code.

“We were playing around with the idea of bringing Gustav Klimt back to six. He’s by Galileo but he is out of a very fast mare,” said O’Brien whose sons, Joseph and Donnacha, team up for the Curragh Group Three winner Speak In Colours.

Gordon Lord Byron has his first start at five furlongs for over two years and although rated to beat Battle Of Jericho, the Ballydoyle team are in irresistible form.