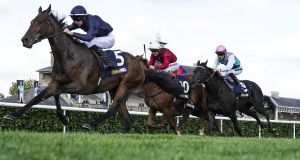 Donnacha O’Brien riding Fleeting to victory in the The William Hill May Hill Stakes at Doncaster. Photograph: Alan Crowhurst/Getty Images

Fleeting came home to good effect to provide Aidan O’Brien with a first victory in the William Hill May Hill Stakes at Doncaster.

A field of 11 juvenile fillies went to post for the Group Two contest and O’Brien was double-handed, with Fleeting the apparent second string behind the Ryan Moore-ridden Peach Tree.

The latter was on the pace throughout before fading, while the trainer’s son, Donnacha, settled 12-1 shot Fleeting towards the rear before angling wide to throw down his challenge on the far side.

The hat-trick-seeking Star Terms was in front racing inside the final furlong, but Fleeting saw out the straight mile best to get up and score by a length and a half.

Star Terms galloped on for second, ahead of Sand Share in third, but Dubai Beauty, the 11-8 favourite following an impressive debut at Newmarket last month, was bitterly disappointing.

Paul Smith, son of part-owner Derrick Smith, said: “Donnacha said she was a bit fresh going down to the start, so he took his time with her and in hindsight with that headwind that was probably a good thing.

“She came through horses really well and we’re really happy with her. I suppose there wasn’t much between her and Peach Tree from her last piece of form and it was a very pleasing effort.”

He added: “She got the mile well. We’ll look at the Fillies’ Mile and the [Prix Marcel] Boussac. They will have to be on the radar now.

“Donnacha was very pleased with her. She picked them up nicely and showed a good temperament. We’re happy.”

Coral went 33-1 about Fleeting for the Qipco 1000 Guineas, while Paddy Power put her in at 25-1 for the Investec Oaks.

Ralph Beckett, trainer of third home Sand Share, said: “I’m very pleased with her. It was a good effort first time on the turf. She’s a big old girl and will improve for a winter on her back, so we’ll see where we go from here. I couldn’t be happier. I’m not sold on the Fillies’ Mile. She might go into Listed company next. We’ll see.”

God Given rediscovered the winning trail with a narrow verdict in the DFS Park Hill Stakes at Doncaster.

Luca Cumani’s filly was beaten just a short head by the reopposing Horseplay in the Lancashire Oaks at Haydock in July before finishing fourth behind Pilaster, the 6-5 favourite for this Group Two affair, in the Lillie Langtry at Goodwood.

Having finished third in a French Group Two on her most recent outing, God Given was a 5-1 shot under Jamie Spencer and made her move racing inside the final quarter-mile.

Horseplay held a narrow advantage racing inside the final furlong, but God Given wore her down to gain her revenge by a neck.

Having been held up last by Andrea Atzeni, Pilaster made late headway to finish a clear third, with Flattering faring best of Aidan O’Brien’s two Irish raiders in fourth.

Cumani said: “After the Lillie Langtry, when she was a bit keen in front, we thought we’d have to be a bit careful over this mile-six and as there was a leisurely pace with the Aidan O’Brien second string, we just sat away and went and did battle on the straight.

“It was a battle and an exciting race. All the more exciting because we won.”

He added: “Ascot [Champions Day, Fillies and Mares Stakes] next. The plan was if she didn’t win today we’d have gone to France for a Group Two on Arc weekend, but now she’s got that Group Two there’s no point.

“Her last race will be at Ascot and then she’ll probably go to stud and make beautiful babies.”

Andrew Balding said of runner-up Horseplay: “She’s run a great race. Obviously the 3lb penalty has paid, but she battled all the way and I’m delighted with her.

“Hopefully we’ll have a Group One opportunity with her in the autumn, possibly in Canada, the Canadian International.”

Roger Varian added of third-placed Pilaster: “The lack of pace hindered us. She was closest at the finish and just got out-sprinted a little bit.

“We’d like to go to Ascot for the Group One on Champions Day. It’s likely it will be on easier ground, which will suit her. Though it’s down in trip, it will probably be more of a test than today was.”