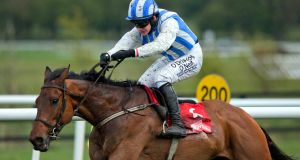 Willie Mullins has said he will be surprised if Ruby Walsh doesn’t choose to ride Killultagh Vic in next week’s Cheltenham Gold Cup.

Killultagh Vic looked to throw away a winning chance when falling at the final fence of last month’s Irish Gold Cup, and perhaps not surprisingly jumped a little carefully over eight fences in a post-race school at Leopardstown on Friday evening.

Walsh was on board Killultagh Vic, who worked alongside the JLT Novices’ Chase hope Kemboy, the mount of Paul Townend.

‘‘Kemboy was very slick. Killultagh was more careful than extravagant, but I don’t mind that. Obviously he got a fright the last day and he was jumping cold there. I imagine he’ll be fine at Cheltenham when his blood is up,” said Mullins.

The champion trainer has finished runner up in the Gold Cup six times and could have up to four runners in Friday’s “Blue Riband”. The quartet also includes Djakadam – who has finished second on two occasions – Total Recall and Bachasson.

“I would imagine Ruby will ride him [Killultagh Vic]. It looks straight-forward. He’s the unexposed horse. But if he goes for something else fair play to him,” Mullins added.

Barry Geraghty also has to choose between the JP McManus-owned pair Minella Rocco and Anibale Fly for the Gold Cup, and he rode the latter in a piece of work after racing.  He didn’t give any indication afterwards as to what his pick will be, and said: “It was nice ground and he felt well.”

Kemboy has an Arkle entry but is likely to go for the JLT instead after his impressive piece of work.

Walsh’s sole ride on Friday’s Leopardstown card, Karaalee, finished third to Jezki in a conditions hurdle, and the champion jockey skips this weekend’s action ahead of Cheltenham.

Instead, Townend, who has not race-ridden since Killultagh Vic’s Irish Gold Cup fall, will have seven rides for Willie Mullins through Gowran on Saturday and Naas on Sunday. The Gowran card has to pass a 7.30am inspection.

JP McManus’s colours were carried to two victories during Friday’s racing. The 7-2 favourite Spider Web landed the featured €50,000 TRI handicap chase and the 2014 Champion Hurdle hero Jezki won the 16th race of his illustrious career in the opening conditions hurdle.

“The race was almost written with him in mind,” said Jezki’s trainer Jessica Harrington, who doubled up in the bumper with Sizing Pottsie. “He may go to Aintree or Punchestown. It will depend on the ground.”

In other news, trainer Mick Winters has been fined €1,000 and ordered to pay a contribution of €600 to Irish Horseracing Regulatory Board (IHRB) costs after a Referrals Committee decision to disqualify his Cork winner of last November, Granny Biddy, for failing a drugs test. Granny Biddy tested positive for meloxicam, an anti-inflammatory drug which is a prohibited substance.

The IHRB has also confirmed the appointment of Andrew “Sandy” Shaw as senior National Hunt handicapper. Shaw takes over the position after the death in December of Noel O’Brien. Shaw is a native of Co Kildare, and joined the Turf Club in 1995 as a handicapper.