Ruby Walsh to return to action at Thurles on Thursday 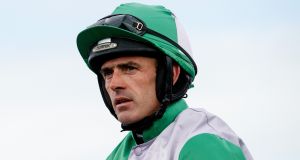 Ruby Walsh: will be back in the saddle aboard the Willie Mullins-trained Lareena at Thurles. Photograph: James Crombie/Inpho

Ruby Walsh will make his eagerly-awaited return to the saddle when he takes up one ride at Thurles on Thursday.

Walsh has been out of action since suffering a broken leg in a fall from Let’s Dance at Punchestown on November 18th, but has always maintained he would be back in time for the Cheltenham Festival, where he has been leading rider 11 times.

He had hoped to come back last weekend but the cold snap put paid to that idea, and he instead makes his return just five days before the start of the Cheltenham Festival aboard the Willie Mullins-trained Lareena in the thurles.ie Maiden Hurdle.

Lorcan Wyer is the clerk of the course at Thurles and while no National Hunt racing has taken place in Ireland since Naas held their Festival Trials fixture on February 25th, he is confident Thursday’s fixture will go ahead as scheduled.

He said: “We have absolutely no problems at Thurles. We’re good to go. We didn’t have the snow that a lot of tracks in Ireland had last week. Most of the snow we did have went quite quickly and while there was a bit more snow just past the winning post, the lads have worked hard to move that and everything is fine.

“We think we’ve produced a good racing surface considering we’re near the end of our season and we’re running short of fresh ground at this stage.

“It will be great to see Ruby back. I’m sure a ride tomorrow and maybe a few more over the weekend will leave him spot-on for Cheltenham, not to say that he won’t be spot-on for tomorrow.”