Nine-year-old had been in line for Mares’ Hurdle in Cheltenham, a race she won in 2016 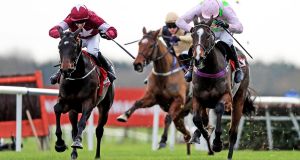 Top-class mare Vroum Vroum Mag will miss next week’s Cheltenham Festival and has been retired from racing.

The Rich and Susannah Ricci-owned nine-year-old had been in line for the OLBG Mares’ Hurdle on Tuesday, a race she won in 2016 and in which she finished second to Apple’s Jade 12 months ago. However, she has not been seen in competitive action since disappointing at the Punchestown Festival last spring.

And while Willie Mullins issued an upbeat report on her progress late last month, he has now admitted defeat in his efforts to get her back to the racecourse.

Joe Chambers, racing manager for the owners, told Press Association Sport: “I can confirm Vroum Vroum Mag has been retired. She isn’t going to make it [Cheltenham].”

Vroum Vroum Mag won her first 10 starts after joining Mullins from France, with the unbeaten run rounded off with victories in the Mares’ Hurdle and the Punchestown Champion Hurdle two years ago.

She was narrowly beaten by Apple’s Jade on her first start of last season in the Hatton’s Grace at Fairyhouse, and while she went on to win her two races she once again found her former stablemate too strong when defending her Cheltenham crown.

Chambers added: “She’s been a hell of a mare, and she’s a regally-bred mare so she should make a valuable broodmare prospect.”

Vroum Vroum Mag will now, “in all likelihood”, be put in foal by an as-yet-unnamed stallion this spring, and retires having won over €420,000 in win and place prize money.