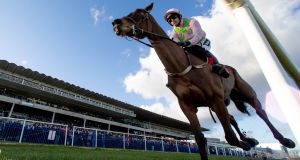 With 22 runners around the globe, there’s barely a pie that Willie Mullins won’t have a finger in this weekend.

The stalwart Un De Sceaux is back in Grade One action at Sandown on Saturday, bidding to roll back the years and repeat his 2016 success in the Tingle Creek Chase.

A few hours before that at Aintree, his stable companion Listen Dear, the centre of controversy after her sale by the defunct Supreme Racing Club in October, lines up in a Listed Chase before eight runners represent the champion jumps trainer at Navan.

Mullins’s reach will extend to Sha Tin in the early hours of Sunday morning where True Self lines up in the Group One Hong Kong Vase.

It’s then back to more familiar jumping ground later on Sunday with a dozen Mullins runners split between Punchestown and Cork.

Overall it’s a remarkable display of strength in depth of a kind that Mullins has exerted for a decade and which might explain why a superb talent like Min is taken comparatively for granted.

The four-time Grade One winner has mixed it at the top level throughout his career yet never generated the sort of headlines reserved for other Rich Ricci-owned stars such as Douvan.

The injury-ravaged Douvan has been rarely sighted since his novice pomp and only returned to action after a 569-day absence at Clonmel last month.

Yet he continues to exert a grip on the popular imagination that Min doesn’t. Mullins even reported on Friday: “Douvan is missing Christmas but I hope to have him back in the New Year.”

That popular appeal also applies to Presenting Percy, who returns to action in the Durkan for the first time since failing to justify favouritism in the Cheltenham Gold Cup in March.

The Pat Kelly-trained star has bounced back from a leg injury and whether or not he can re-establish himself as a Gold Cup contender this season will concentrate a lot of minds on Sunday.

The fact remains, though, that 2½ miles looks short for Presenting Percy while Min is at his formidable best over it.

Last year’s Durkan defeat of Shattered Love is one of four times Min has run at 2½ miles. They have yielded three wins and a single narrow defeat.

Last season’s 20-length rout of Politologue in Aintree’s Melling Chase was as fine a performance as Min has ever put up, and a repeat of that will certainly have his eight opponents in serious trouble.

Current 14-1 quotes for Cheltenham are mostly rooted in his potential. However, if Cilaos Emery can overcome his inexperience and get the better of a 169-rated horse like Ballyoisin, he will start to look a proper contender.

Elimay is the Mullins hope for a Grade Three mares’ novice chase where she makes her debut over fences. Sinoria impressed on her own first start at Thurles and that experience may prove crucial.