Limerick: Paul Townend can make hay at expense of Haymount 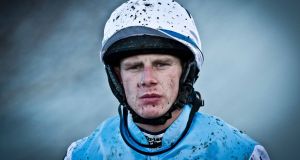 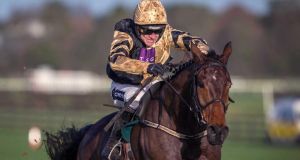 Bellshill, with Ruby Walsh up, clears the last on his way to winning at Naas earlier this year. Photograph: Ryan Byrne/INPHO

Playing second-fiddle to Ruby Walsh in the Willie Mullins operation continues to pay first-class dividends for Paul Townend, who can prove the point again on St Stephen’s Day.

With Walsh on duty at Leopardstown, Townend is set to go to Limerick, principally to team up with RSA favourite Bellshill in the featured Grade 2 Shannon Airport Novice Chase, but with other good prospects too.

A fortnight ago, Walsh’s presence at Punchestown allowed Townend in for a lucrative Cork four-timer headed by Douvan, but which also included Adrian Maguire’s Knockraha Pylon in a handicap.

That horse is back with a good chance in Monday’s mares’ handicap hurdle, while another of Maguire’s Knockraha runners, Boss, can also be a leading player in a handicap chase.

With the Mullins-trained Allblak Des Places heading for a conditions hurdle with a 142 rating, then it’s far from impossible that Townend could end up fancying his chances of another four-timer.

The principal focus will be resolutely on Bellshill, however, in an impressively competitive feature race which in the past Mullins has made a habit of dominating.

He trained Outlander to beat Avant Tout a year ago, while in 2013 The Paparazzi Kid led home a Mullins 1-2-3.

With ground conditions set to be testing, and unlikely to suit either Diamond King, or Attribution, then Bellshill and Mullins’s other hope, Haymount, could end up dominating the finish.

Patrick Mullins is on Haymount, who put up a much improved display when beating the subsequent Drinmore hero Coney Island on his chasing debut at Punchestown.

That bare form makes a convincing case, but Bellshill was impressive on his own chasing debut at Gowran and he was a good 20lbs superior to his stable companion over hurdles.

One of Bellshill’s Grade 1 wins last season was on heavy ground and he can prove that bookmakers, who make him an 8-1 RSA favourite, with Haymount more than twice those Cheltenham ante-post odds, have got it right.

Allblak Des Places has run just twice for the Mullins team, the second of which was a runner-up placing to Footpad last February, standout form in the context of his race on Monday.

Bravissimo has his first start for the champion trainer in the following maiden hurdle, having finished third in his only start in France.

This is no easy task as Champagne Classic ran a good race behind Turcagua at Punchestown, while Without Limites looks an interesting contender too.

Liz Doyle’s runner should relish a step up in trip from his Gowran run a month ago and heavy ground will be no problem judged on his bumper form.

Gigginstown present a quandary in the opening juvenile hurdle, with both Tout Est Permis and Leomar lining up. The latter won on the flat in France and Germany earlier this year, but Tout Est Permis has the benefit of experience.