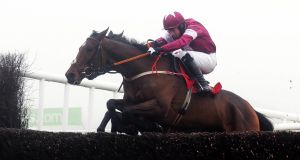 Leopardstown’s St Stephen’s Day fixture is famously a day-out for once-a-year race goers and no racing expertise is required to appreciate a potential head-to-head between Willie Mullins’s Min and Michael O’Leary’s Identity Thief in the first Christmas festival Grade One highlight.

Racing has had a tumultuous 2016 in many respects but perhaps it only properly broke into the wider public consciousness when O’Leary dramatically removed 60 horses from the champion trainer in September due to a dispute over training fees.

Considering the Ryanair boss’s reported billionaire status one can presume the split didn’t revolve around the actual precise financial implications of Mullins charging an extra tenner a week but rather the sort of battle of wills which is all too recognisable to anyone.

Horses might remain a mystery for most but everyone can twig the dynamics of two strong characters not prepared to back down.

Whatever the circumstances the immediate outcome has seen the transfer of many of those horses to Gordon Elliott which in turn has made Mullins’s attempts to win the trainer championship for a 10th year in a row anything but a done deal.

But it has also introduced a separate “frisson” to the winter campaign and Monday’s Racing Post Novice Chase is shaping up into a race that can be billed in advance as a straight-forward Grade One duel between the two rival camps.

Half a dozen top-flight races have been run so far this season and the Hatton’s Grace clash between Apple’s Jade in O’Leary’s Gigginstown Stud colours and Vroum Vroum Mag for Mullins earlier this month produced a superb finish.

Apple’s Jade’s win was a pleasant surprise for her connections but this St Stephen’s Day highlight sees both operations pitching their top two-mile novices into a clash where expectations are huge and defeat is likely to leave a sizable dent in at least one reputation.

Of course reducing a seven-strong field of novice chasers to a straight match is dangerously presumptive when there’s a circuit of stiff Leopardstown fences to be negotiated.

Two years ago the brilliant but ill-fated Vatour, like Min, owned by Rich Ricci, started 1 to 4 for the €90,000 highlight and almost came down at the seventh. Ironically it was Gigginstown’s Clarcam who took advantage to win.

Identity Thief’s trainer, Henry De Bromhead, has two other smart novices lining up in Three Stars and Ordinary World while the Barry Connell owned Tully East was impressive at Thurles and is something of a dark-horse.

Nevertheless bookmakers already have all but boiled it down to two with Min odds-on after producing a chasing debut performance at Navan that was visually as impressive as both Vatour and Douvan displayed in the same race when getting their own fencing careers under way.

If Vatour subsequently had a Christmas blip, Douvan was imperious a year ago: the difference this time is that in Identity Thief, Min has to tackle a proven Grade One winner over hurdles who shapes with the potential to be significantly better again over fences.

Considering Identity Thief won a Fighting Fifth last year and proved a legitimate Champion Hurdle contender, that’s quite an idea. He has also had the benefit of two runs over fences already rather than one and considering the unsettled weather outlook, Identity Thief’s proven ability to go on soft ground looks a potentially decisive plus.

O’Leary’s Gigginstown colours can also be on the mark in the following handicap chase where a drop back to two miles should suit Ball d’Arc while Trainwreck is his big bumper hope although Midnight Escape could prove tough to beat in that.

Racing’s other major owner, JP McManus, isn’t represented in the Grade One feature but the famous green and yellow colours could wind up being the major players in the first three races of Leopardstown’s Christmas 2016.

Nevertheless this strapping three-year-old has been impressive in two starts to date over flights and has the size and scope to be able to cope with very soft going. Landofhopeandglory has a length to spare over Bapaume from Fairyhouse earlier this month and can confirm the placings.

His stable companion Outspoken hasn’t run in over a year but the experience picked up from his hurdling debut could be a major plus in the opening maiden hurdle while Castello Sforza can be expected to step up from his own jumping debut in the second maiden.