Cue Card in top form for clash with stablemate Thistlecrack

Paddy Brennan says last year’s winner at Kempton is ‘as good, if not better, than ever’ 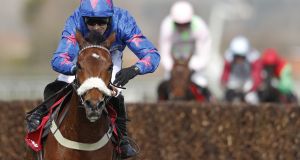 Paddy Brennan riding Cue Card to win at Aintree in April. “I couldn’t be happier with him,” says the jockey. Photograph: Alan Crowhurst/Getty Images.

Paddy Brennan reports Cue Card to be in tip-top shape ahead of his mouthwatering clash with stablemate Thistlecrack in the 32Red King George VI Chase at Kempton on St Stephen’s Day.

The Irishman has ridden Colin Tizzard’s ace in his last eight starts and the star duo will be bidding to repeat last year’s victory in the Christmas showpiece. Cue Card showed his well-being with an impressive victory in the Betfair Chase at Haydock last month, a race he has now won three times.

“I went down to Colin Tizzard’s this morning and sat on him for the first time since winning the Betfair Chase last month – and he felt great,” Brennan told his 32red.com blog.

“In fact, he felt as good, if not better, than ever. I schooled him over fences, he jumped great, and I couldn’t be happier with him.”

Cue Card’s biggest rival lies close to home in the shape of Thistlecrack, even though he is only a novice in chasing terms. His rider Tom Scudamore feels the time is right for last season’s champion staying hurdler to take on the cream of chasing talent.

Scudamore believes the horse’s experience at Grade One level over hurdles last season will stand him in good stead. The plan had always been to go to Kempton, originally for the Kauto Star Novices’ Chase, but connections thought they may as well instead run in the big race over the same course and distance, even though it means facing his stablemate.

“It’s time to take on the big guns,” Scudamore told At The Races. “We had a couple of chats. John and Heather [Snook, the owners] were always going to make the final decision and they asked me about Thistlecrack and how I felt about his progress and they did the same with Colin Tizzard.

“He’s different from other novices in that you get those wonderful novices who go and win an Albert Bartlett or a Neptune novice hurdle and have never stepped out of novice class and have to find their way over fences in novice races in their first season.

“He’s won in Grade One company. The galloping part has never been the issue. It’s just his technique, the same as any other horse going from hurdles to fences. It’s a different discipline and not all can take to it.

“He’s taken to it very well and there’s no reason why he shouldn’t do.”

Don Poli’s career is to be put on the line in the Lexus Chase at Leopardstown, a race he won 12 months ago.

Since putting in an abysmal display in the JNwine.com Champion Chase at Down Royal, the Gordon Elliott-trained seven-year-old has had a spell hunting in a bid to revitalise him.

“I’d hope to see a different horse on winter ground. If we don’t, we don’t have a horse any more,” said Eddie O’Leary, racing manager for owners Gigginstown House Stud.

“He has been hunting and doing this and that but we can draw a line through him if he does not show some spark in the Lexus.”

Gigginstown are responsible for eight of the 19 horses left in the Grade One prize at the confirmations stage.

Noel Meade’s Road To Riches also holds an entry in the King George at Kempton. The others are Empire Of Dirt, Mozoltov, Outlander, Roi Des Francs, Valseur Lido and Wounded Warrior.

Willie Mullins has left in recent John Durkan Memorial Punchestown Chase scorer Djakadam and the mare Vroum Vroum Mag, who has alternative engagements in the Christmas Hurdles at both Leopardstown and Kempton.