Many Clouds to bid for lucrative Lexus Chase at Leopardstown 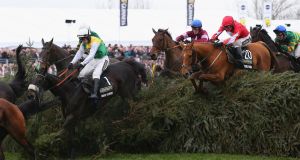 Oliver Sherwood concedes his Grand National hero Many Clouds faces a “big ask” in next week’s €150,000 Lexus Chase but believes the Leopardstown track will suit him.

Many Clouds returned to action at Liverpool last month with an impressive display over the Mildmay fences which has set him up for a Christmas trip across the Irish Sea to take on Valseur Lido and possibly Djakadam.

“Leopardstown takes some jumping and that’s his forte. His jumping at Aintree was exemplary. He has come out of Aintree the best he’s ever done and I’m a great believer in striking while the iron is hot.

“It’s a big ask to take on Mullins and Gigginstown on their own back door. But if you’re not in, you can’t win,” said the English trainer.

Many Clouds is currently an 8-1 shot to land the Lexus, a race which cross-channel raiders have a notably good record in over the last decade, winning on seven occasions, the last of them Bob’s Worth in 2013.

“We’re sort of half-thinking that we might aim Outlander at it. Obviously Giggisntown have got plenty for Leopardstown,” Outlander’s trainer Gordon Elliott said.

“He came out of his last race well so I’m thinking we might run him in the King George.”

The King George betting is dominated by trainer Colin Tizzard after confirmation his star novice Thistlecrack will join the defending champion Cue Card in the cross-channel highlight.

In contrast, Joseph O’Brien’s St Stephen’s Day focus will be on Landofhopeandglory who is likely to try and extend his unbeaten record over jumps to three in Leopardstown’s juvenile hurdle feature.

“He is progressing. A stronger pace would have suited the last day but he jumped well and we’re looking at Leopardstown,” said O’Brien.