Cue Card and Thistlecrack all set for King George clash 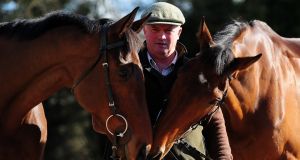 It is 11 years since the last Irish-trained winner of the King George VI Chase and bookmakers reckon the gap back to Kicking King in 2005 is set to get even longer.

Michael O’Leary’s Gigginstown Stud team have left in both Road To Riches and Roi De Francs for Kempton’s Grade One highlight on Monday but they are already the outsiders of the seven entries left in the race.

Instead it is the Colin Tizzard pair, Cue Card and Thistlecrack, who dominate ante-post betting with the King George title-holder, Cue Card, just favourite at a general 11-8.

Nicky Henderson has supplemented his Peterborough Chase winner, Josses Hill, into the race while the former dual-winner Silviniaco Conti is also in contention.

Road To Riches is the shortest of the two Gigginstown possible at 25-1 but the former dual-Grade One winner, and Cheltenham Gold Cup third, hasn’t won in over a year and was beaten by Ballycasey at Clonmel in October.

Gigginstown’s colours could also figure in the Grade One Kauto Star Novices Chase on the same Kempton card.

A Toi Phil has been left in the race alongside his stable companion Jetstream Jack and Tony Martin’s Anibale Fly.

The latter also has a Grade One option in Leopardstown’s Racing Post Novice Chase on Monday where the main support event is the Grade Two Knight Frank Juvenile Hurdle.

Joseph O’Brien has four of the 13 horses still in contention to run and they include the likely favourite Landofhopeandglory.

Gordon Elliott’s Dinaria Des Obeuax was hugely impressive when winning on her Irish debut at Cork earlier this month and is also a likely starter.

In other news, English trainer Jim Best has decided not to appeal the six month suspension he received from the British Horseracing Authority last week for ordering jockey Paul John to stop two horses in December of last year.