Leopardstown to consider watering policy ahead of February Festival 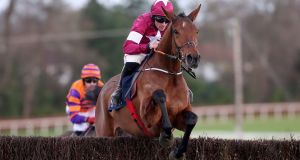 Leopardstown officials will consider a watering policy ahead of the ‘Dublin Racing Festival’ after ground concerns turned Sunday’s Grade One novice chase into a three-runner anti-climax.

Their only opposition though was a single outsider, Lord Schnitzel, after three of the original seven declarations were taken out due to a change in going which turned the ground on the chase track officially “good”.

It left the 4-9 favourite Battleoverdoyen to beat Champagne Classic in a contest their trainer Gordon Elliott described as “a nice school”.

It means the state of the going will be of major interest on the approach to the Dublin Racing Festival which takes place over two days at the start of February and is worth €1.8 million in prizemoney.

The showpiece fixture got reduced to near farcical levels last season with 22 horses taken out of Day Two which saw good to firm ground in places on the steeplechase track.

They included six of the ten declared runners in the featured Irish Gold Cup.

On that occasion prominent figures criticised Leopardstown’s failure to water including Michael O’Leary who said there was “almost a horse welfare issue” involved.

After taking Carefully Selected out of Sunday’s race, Willie Mullins commented: “You have to wonder whether Leopardstown have to rethink their policy in relation to watering.

“It’s a hard thing to do but these are questions we were asking last year and now we’re asking them again.

“I’m already looking at the Dublin Racing Festival and looking for possible alternatives for horses.

“I didn’t run Al Boum Photo (on Saturday) because I was concerned about the ground. Today has confirmed it. This horse (Carefully Selected) is a winter ground horse.”

A decision on watering for last season’s Dublin Racing Festival was complicated with forecast rain not arriving and the track having to survive an overnight inspection due to frost.

Last winter’s freakishly dry weather conditions haven’t been repeated so far this season yet, worryingly, ground continues to be an issue at Leopardstown.

“The hurdle racing lines are on summer watered ground for the flat which they retain juice a bit more,” explained Leopardstown’s clerk of the course, Lorcan Wyer, on Sunday.

“I will speak to David Attwood (Operations Manager) and see where we are but it (watering) has to be an option without question.

“I’m of an age where I was riding at UK festivals like Ayr and Aintree and it was slick, fast ground. I’m not saying it was acceptable but it was the way it was.

“Things have evolved. It’s a different situation. We will give serious consideration to watering if it’s necessary,” he added.

Battleoverdoyen’s success was the latest highlight of a vintage Christmas programme that saw O’Leary’s Gigginstown team end up with 19 winners overall.

“Davy (Russell) said the two of them only hacked around and it was like a nice school,” Gordon Elliott said. “It’s not ideal for the sponsors who put the prizemoney up but there’s nothing we can do about the ground and that’s the way it is.”

The going was ‘yielding’ on the hurdles course which proved ideal for Sharjah who recorded back-to-back wins in the Grade One Matheson Hurdle.

Willie Mullins’s second-string was too quick for Petit Mouchoir from the last to win at 9-2 under the trainer’s son, Patrick.

The odds on favourite Klassical Dream disputed the pace with Petit Mouchoir early on but was lucky to survive a dreadful mistake at the fourth flight which all but ruined his chance.

“He’s a good horse on nice ground,” Mullins said of the winner. “There was hardly a blow out of him there. Klassical Dream is blowing hard and he’s going to improve. He’ll have to improve on that but I think the improvement is still there.

“Just at this stage of his career against these horses he’s going to want much softer ground. The ground was too good.”

“I was able to arrive just as I wanted to at the last. Down to the last I thought I was going to win on the bridle but then I realised I didn’t want to miss and he needed pushing.

“He did it well in the end. Maybe he does want this good ground and I would love another crack at it (Champion Hurdle,)” the winning rider said.

Sharjah is 14-1 for the Champion Hurdle, a race in which he was brought down at the third flight last season.

“We had a nice Christmas, probably not vintage but anytime you win a few Grade 1s and get other winners it has to be good,” summed up Willie Mullins after saddling half a dozen Leopardstown winners for the week.

They included the odds-on Stormy Ireland who made all in the Grade Three mares hurdle.

Appropriately the finale finished in a one-two for Gigginstown as the odds on Eric Bloodaxe proved too good for Wide Receiver.

Man City’s Abu Dhabi owners not the sort to back down over ban 10:51
Pints and sports events; England ready to show their best 07:30
Frank Lampard says Harry Maguire should have been sent off 06:36
Willie Mullins prefers to ‘keep it simple’ and run Benie in Mares Hurdle 06:00
Stopping Jonny May’s pace must be high in Ireland’s priorities 07:14
Here is your handy guide to sport on television this week