Laurina looking to land Punchestown primer ahead of Cheltenham 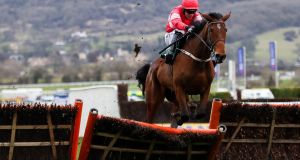 Laurina will run in the Coral Quevega Hurdle at Punchestown on Wednesday. Photograph: James Crombie/Inpho

Laurina takes another step in trying to emulate the wonderful Annie Power when she lines up at Punchestown on Wednesday.

Annie Power landed the Listed Coral Quevega Hurdle in 2016 en route to Champion Hurdle glory at Cheltenham and her trainer Willie Mullins hopes to complete the same double with Laurina.

Unbeaten in four starts for the champion trainer, Laurina is currently as low as 7-2 third favourite for the Champion Hurdle.

If she can’t dispatch half a dozen opponents – including her two stable companions, Stormy Ireland and Good Thyne Tara – it will be a major surprise, although on official ratings Laurina hasn’t much in hand.

That reflects the huge reputation the giant six-year-old has always enjoyed among the Mullins team.

It is certainly that reputation rather than a facile 48-length victory over a single opponent at Sandown last month that is behind her heady position in the Champion Hurdle market.

“She’s been 100 per cent since Sandown,” Mullins’s son and assistant, Patrick, reported on Tuesday. “Cheltenham is the aim so at the moment we’re trying to get her to the Champion Hurdle.”

Cheltenham will also be in the minds of connections lining up in Wednesday’s Pertemps Hurdle qualifier, in which the winning novice chaser Its All Guesswork reverts to the smaller obstacles.

With just three weeks to the start of the festival time is running out for Cheltenham warm-ups. However, connections of the Gold Cup favourite Presenting Percy have kept open the option of taking in this Saturday’s BetVictor Bobbyjo Chase at Fairyhouse.

Presenting Percy is one of 11 entries left in the race after Tuesday’s forfeit stage.