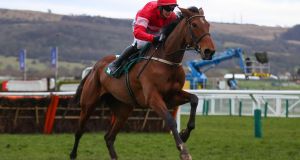 Laurina will run at Punchestown on Wednesday as her preparations for the Champion Hurdle continue. Photograph: James Crombie/Inpho

Laurina will bid to enhance her claims for the Champion Hurdle when she lines up for the Smart Money’s On Coral Quevega Mares Hurdle at Punchestown.

The Willie Mullins-trained six-year-old is a general 7-2 third favourite for the Cheltenham showpiece on March 12th after a facile success, by 48 lengths, over a solitary rival on her only outing to date this season at Sandown last month.

She has been kept under wraps by connections since then but is ready to return in Wednesday’s Listed contest over two and a half miles.

“It looks a nice opportunity for her. She’s been 100 per cent since Sandown, no problems with her. We’re very happy with her.

“Cheltenham is the aim — so at the moment we’re trying to get her to the Champion Hurdle.

The Closutton stable have two other runners in the seven-strong field at Punchestown.

Stormy Ireland, who is in the same ownership of Sullivan Bloodstock as Laurina, was second to Espoir D’Allen at Limerick in December.

She had earlier defeated Mullins’ third representative, Good Thyne Tara, in a Listed race on this course in November.

Good Thyne Tara has since gone to land a Grade Three at Leopardstown over Christmas.

“She has won a couple of Listed and graded hurdles, so she is a high-class mare,” Mullins said of Good Thyne Tara.

“We are hoping she can pick up some more black type and some more prize money.”

Both Good Thyne Tara and Stormy Ireland hold entries in the OLBG Mares’ Hurdle at the Cheltenham Festival.