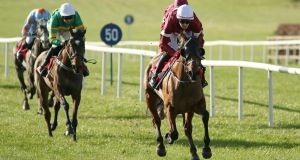 Gordon Elliott is favourite to be the Cheltenham Festival’s leading trainer for a third year in a row and Sunday’s 428-1 four-timer at Navan indicated his powerful string is firing on all cylinders.

The way the Grand National hero Tiger Roll sprang a popular 25-1 surprise in the Ladbrokes Boyne Hurdle suggests a stable in rare form with just over three weeks to the festival.

Not surprisingly Tiger Roll is now a 12-1 clear favourite to become the first since Red Rum 45 years ago to win the National back to back.

But he is also a red-hot favourite to land a fourth Cheltenham success in the Cross-Country, a race he won last year under Sunday’s jockey Keith Donoghue.

Elliott is also a 13-8 favourite to be the festival’s top trainer again, having won the prize last year with eight winners. He has saddled 22 Cheltenham winners in all.

Elliott described Tiger Roll’s victory as a surprise but Ucello Conti’s comfortable 4-7 success under Barry O’Neill in the hunters’ chase duly earned the 11-year-old a slot in the trainer’s Cheltenham squad.

“Barry said it might have been better if he’d let him stride on a little bit. He said he was breaking his stride and wasn’t jumping as well as he can,” Elliott said afterwards.

“We’ve done what we had to do and the plan now is straight to the Foxhunters.

O’Neill was also on board the odds-on favourite Thatsy, who beat his stable companion Multifactorial in cheeky fashion in the bumper.

The grey travelled notably well through the race and Elliott said: “It wouldn’t be the biggest surprise if he had an entry in the Cheltenham bumper. He’s a smart horse. He’s got a bit of boot – he’s not slow.”

Jack Kennedy kicked off the Elliott four-timer with a patient ride on board Milan Native. The free-running Raya Time had burned off everything else in the race before the last but was powerless to repel Milan Native’s challenge.

The Henry de Bromhead-trained horse landed the Ten Up Novice Chase by half a length from Elliott’s 5-4 favourite Champagne Classic. It earned him quotes of as low as 14-1 for the RSA Chase.

More immediately it also saw Blackmore narrow the gap to Paul Townend in the jockeys’ championship to just three winners.

Having enjoyed a hat-trick at Gowran on Saturday, a confident Blackmore had Chris’s Dream jumping superbly for much of the race. They were hard-pressed in the closing stages but the 5-2 shot had enough in hand.

Blackmore has yet to win at Cheltenham and whether Chris’s Dream will figure in her festival calculations could yet be dictated by ground conditions there.

De Bromhead described Sunday’s “yielding” conditions as being as fast as the horse likes it.

“I’d say you’d have to look at the RSA. I think he’s entitled,” he said. “The ground might be the only reason why not: it’s as good as he’d want it there today.”.

De Bromhead also said it remains “50-50” about Saturday’s Red Mills winner Monalee lining up in either the Gold Cup or Ryanair at Cheltenham.

Dragon Houdini justified some significant market support in the mares’ handicap hurdle, the 10-1 shot running out a near four-length winner from Liffeydale Dreamer.

The Shane Cawley trained runner had been fancy odds in the morning but won with authority under Donagh Meyler.