Johnny Murtagh hoping to carry Group One success into training 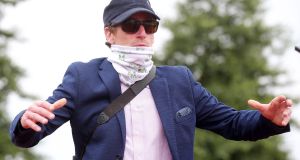 Trainer Johnny Murtagh has Know It All running in France on Sunday. Photo: Jonathan Porter/Inpho

Johnny Murtagh rode 106 Group One winners during his stellar riding career but will try to secure a first top-flight success as a trainer in France on Sunday.

The Qatar Racing-owned three-year-old Know It All takes her chance in the Prix Rothschild over a mile at Deauville. She will be ridden for the first time by British champion jockey Oisín Murphy.

Just six fillies take their chance in a race due off at 2.50 Irish-time and which is live on Sky Sports Racing.

The field is topped by last year’s Coronation Stakes winner Watch Me who recently won over the course and distance at Deauville.

In comparison Know It All can boast a Group Three success at Leopardstown last time but Murtagh is hopeful she can progress enough to secure a victory he admits would be “huge” in terms of his own training career.

“It’s what we need. The horses are running really well. We won a Listed race the other night in Galway and a Group Three earlier in the year. But to get to the next level you need to perform in Group Ones. It’s what we’re striving for,” he said on Friday.

Murtagh was centrally involved in preparing Royal Diamond to win the 2012 Irish Leger - at a time when he still one of Europe’s elite jockeys - although the horse was officially trained by Tommy Carmody.

A couple of years later Murtagh retired from the saddle after two decades winning at the highest level. His final Group One tally included 19 in 2008 alone when riding for Aidan O’Brien.

Already in this coronavirus interrupted season he has saddled 27 winners worth almost €500,000 in prizemoney. That puts him fifth in the trainers’ championship. A Group One, however, would take this campaign to another level.

“Sheikh Fahad (Qatar Racing owner) said it to me a couple of weeks ago about the Rothschild, explained it was fillies only, and so we made the entry.

“The filly worked very good last weekend and we said we’d let her take her chance. She’s on the improve. She has to improve on ratings. But she’s a big filly and it’s a nice spot for her.

“It was going to be complicated to ship her across. But I said to them, to give her the best chance, we need to fly the filly out on the morning of the race. So it’s straight to Deauville and then 10 minutes to the track,” Murtagh added.

With the 14-day isolation advice still in play for anyone coming into Ireland, the Curragh-based trainer isn’t making the trip himself to Deauville where he won the Morny on Bushranger in 2008.

Jockey Tom ‘Socks’ Madden is making the trip to Dusseldorf however for Sunday’s Group One German Oaks, the Preis der Diana, where he teams up with Jessica Harrington’s runner Silence Please.

The filly, who beat her stable companion One Voice - runner up in Thursday’s Nassau Stakes - at Navan in June takes her chance against 15 opponents including Frankie Dettori’s mount Miss Yoda.

Madden was denied by a nose on Njord in Tuesday’s big handicap at Galway but will try to secure a first ever Irish-trained success in the German classic.

Harrington is aiming for some Oaks glory this season having finished runner up in both the Irish Oaks and the French Oaks with Cayenne Pepper and Alpine Star respectively.

Her No 1 rider Shane Foley again stays at home and will be on duty for the stable at Galway on Saturday where Castel Gandolfo looks a major player in a maiden.