Crowds ruled out at Irish Champions Weekend and Listowel festival 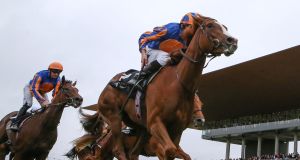 Two of Ireland’s biggest September fixtures, the Longines Irish Champions Weekend and the Listowel Harvest Festival, will be staged behind closed doors because of continued uncertainty surrounding the Covid-19 pandemic.

The Irish Champions Weekend is scheduled for September 12th and 13th, with the first card at Leopardstown featuring the Irish Champion Stakes and the Coolmore America Justify Matron Stakes.

It had initially been hoped crowds of up to 5,000 people might be permitted by September; but, after the Irish Government announced a delay to the next phase of its lockdown-lifting roadmap last week, organisers decided there was little chance spectators could be allowed at the fixture.

Paul Dermody, chief executive of HRI Racecourses, said: “With less than eight weeks to go before Longines Irish Champions Weekend, it was the committee’s view that this was the optimum time to give people certainty.

“It is a great shame that our feature weekend of flat racing will not be enjoyed by racegoers in person this September, but we will ensure a warm welcome for everybody when they return next year.

“In the meantime, we will be refunding all of those who availed of early-bird and advance ticket offers. We will now focus our attention on providing racing fans with a brilliant at-home experience.”

“It is a great pity, but we still have a wonderful weekend of racing to look forward to. The committee would like to take the opportunity to thank the sponsors of all races for their loyalty, and we look forward with interest to see the array of horses that will line up at Leopardstown and the Curragh.”

He said: “In these unprecedented times, and in line with Government guidelines, the Listowel Race Company has made the extremely difficult decision to race behind closed doors.

“This means the event will not be open to the general public this year.

“The health and safety of everyone is our number one priority – and with crowd restrictions in place, it would be very difficult for us to run the festival, because it attracts significant numbers of visitors to Listowel each year.

“Making the announcement now gives all of our valued patrons notice, with regard to travel plans and accommodation bookings.

“We would also like to acknowledge and thank the residents and business community of Listowel for their contribution to the Festival down through the years and already look forward to welcoming everyone back in 2021.”