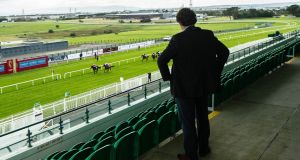 Trainer Ado McGuinness watches the second race from an empty grandstand on the opening day of the Galway Racinf Festival. Photograph: James Combie/Inpho 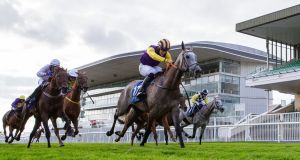 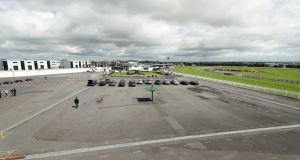 An empty view of where bookies would normally operate during day one of the Galway races. Photograph: Niall Carson/PA Wire

Galway racecourse faces a “seven-figure” loss on the back of this week’s festival taking place behind closed doors.

As Irish racing’s most famous meeting of the year kicked off in ghostly silence on Monday, Galway’s chief executive Michael Moloney said such losses due to the coronavirus pandemic are financially unsustainable.

More general queries about the future viability of behind closed doors action was something most of those on the ground at Ballybrit were too busy to ponder.

Nearly two months since racing resumed after lockdown those who stage racing in front of no one have got used to the new norm.

Shorn of the frivolity surrounding it, jockeys, regulatory officials and stable staff have got on with the functional task of keeping the racing train on track.

It works too, in terms of providing a screen spectacle for fans and punters as well as a shop window for an industry.

But in front of vast empty stands normally thronged by thousands of raucous racegoers, it felt a joyless exercise.

That Galway is renowned for exuberant fun only underlined the workaday atmosphere on the ground.

Aware of national curiosity in the country’s most distinctive fixture taking place in the Covid-19 climate there was plenty of attention on the protocols in place.

It was efficiently done and with the co-operation from all involved. But social distancing in this most social of environments was dispiriting.

On a bright midsummer evening it brought a dark connotation to John B Keane’s famous description of the Galway races as a state of mind and fun didn’t figure prominently.

Normally attuned to the demands of up to 130,000 people crowding in through the week, Moloney had time to cast an optimistic eye to the future.

“As soon as race-week is over we will begin planning for 2021. We have to follow the Government advice as to where we are and what we do for next year. But we will hope to have lots of people here. It’s something we will be ready for,” he said.

For now though he is left to contend with overseeing the most hollow festival in Galway’s 150-year history.

“Normally, between everybody, you’re talking in the region of 1,500 people working here. So it’s very strange today,” Moloney admitted.

“It’s a serious situation. When racing was put back on by Horse Racing Ireland we were there to take the fixtures. But it is a huge blow to the track. We’re talking a seven-figure sum in terms of the impact on the track itself. That’s not something we can sustain,” he added.

Listowel and Irish Champions Weekend are already confirmed as being behind closed doors in September and Moloney warned some tracks could need assistance if the current grim reality continues.

The immediate focus though is on this week and if the track is all but empty then wider anxiety about people descending in party mood on the city this week is already obvious on social media.

None of it makes for an especially exuberant atmosphere although jockey Finny Maguire did his best after winning Monday’s feature on Princess Zoe.

The 7-1 shot landed the Connacht Hotel Handicap, Ireland’s most prized race for amateur riders, by bursting through in the closing stages in a blanket finish.

Maguire, 22, the son of former top jockey Adrian Maguire who won the Galway Plate back-to-back in 1992 and 1993, saw his patience rewarded in style on the Tony Mullins trained German import.

Victory meant Maguire rode out his claim in style and said: “It’s some way to lose the 3lbs – although it was nice I still had it!

“I’ve ridden a few fancied yokes in this since I started riding six years ago. Third was the closest I got on a horse of my dad’s on my first ride so I was struggling to get involved ever since. But we got there.”

Mullins got the better of his brothers Willie and Tom who also had runners in the race but admitted the absence of crowds took away a little from the victory.

To win a feature race here is like a Cheltenham winner to me,” he said. “She is in here again on Saturday but she’s a good filly and I want to do right by her. We’re thinking of the English Cesarewitch but we will also look at black type.”

Dermot Weld’s festival fortunes dipped to just a single winner in 2019 but the ‘King of Ballybrit’ bounced back with a 44-1 double on Monday completed by Enable’s half brother Centroid in a handicap.

Gavin Ryan secured a perfect run up the inner on the turn in and just held on by a nose to add to Blue For You’s success in the earlier juvenile maiden.

The winner’s trainer Michael Mulvany said: “It’s a different feeling to have a winner tonight. Normally there’d be an army load of us who’d come up for the week and would give it welly.

“Some are still coming [to Galway] but they’re not here and can’t really enjoy it.”

Some Galway norms remain unchanged though and on Monday just a single favourite emerged victorious.

JP McManus’s Flying Scotsman landed 100-30 favouritism in a handicap having been upped significantly in trip. The winner wasn’t ruled out of making a quick reappearance in a race on Tuesday.