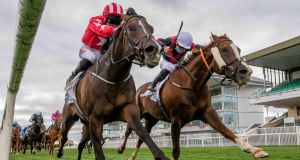 Gavin Ryan on Saltonstall (right) inches out Tom Madden on Njord to win the Colm Quinn BMW Mile for the second year running at Galway on Tuesday. Photograph: Morgan Treacy/Inpho

Saltonstall joined an exclusive Galway club when pulling off back-to back victories in Tuesday’s festival feature.

It was only by a nose in a heart-stopping finish but Ado McGuinness’s star landed the Colm Quinn BMW Mile for a second year running.

Whatever the title it is always one of the most competitive handicaps of the year but never has it come closer to a dead-heat outcome.

Jessica Harrington’s Njord looked to have the race sewn up entering the final furlong only for apprentice jockey Gavin Ryan to secure Saltonstall a dream run up the inner and set off in pursuit.

The pair flashed past the line to provoke a lengthy photo-finish that revealed Saltonstall had just got a tincture of his nose in front when it counted.

To compound Harrington’s frustration her other two runners in the race, Onlyhuman and the 9-2 favourite Tauran Shaman finished third and fourth.

“I was hoping for a dead-heat!” admitted Ryan afterwards as the 20-year-old rider celebrated one of the biggest wins of his burgeoning career.

Saltonstall was 7lbs higher in the handicap compared to when landing the race under Colin Keane a year previously and Ryan’s 5lb claim ultimately appeared to be crucial.

For McGuinness, based near Lusk in Co Dublin, it was a thrilling follow-up to 2019’s victory.

“It was so close. I was on the top tier of the stand and I honestly didn’t know whether we were up or not,” he admitted.

“The plan was to drop in and go the outside but Gavin gave him the most wonderful ride. He got all the splits up the inner. He went the shortest way around on the fresh strip of ground and fair play, Gavin gave him a serious ride.

“We worked him last week and he didn’t work well. We were humming and hawing were we going to run him he worked that badly on Tuesday, and here we are today standing in the winners’ enclosure.

“I can’t believe we’ve done it back to back and it’s more of a surprise than last year,” McGuinness added.

In contrast it was a frustrating outcome for Harrington who had earlier landed her first winner of the week with Rocket Science.

However, the JP McManus-owned Flying Scotsman is already two from two at Ballybrit after winning a second handicap there in less than 24 hours.

Carrying a mandatory 6lb penalty for winning over a mile and a half on Monday, Flying Scotsman made light of a drop back to a mile to justify 13-8 favouritism under Wayne Lordan in another close finish.

If the step up in trip was officially given as a reason for Flying Scotsman’s apparent improvement in form the previous night, Joseph O’Brien pointed to the application of first-time cheek-pieces as helping the horse double up this time.

O’Brien also didn’t rule out Flying Scotsman striking while the iron is hot at Leopardstown on Friday over a mile and a quarter.

There was nothing close about the outcome to the Listed Corrib Stakes though as the 15-8 favourite Champers Elysses romped home by seven lengths under jockey Ben Coen.

It was a 28th winner of the campaign for Johnny Murtagh who pointed to the Fairy Bridge Stakes as a likely next target for the improving filly.

“But for a little bit of a technicality she’d have been sold to the US and thankfully they [owners Fitzwilliam Racing] kept her,” he said.

Jim Bolger’s Meala won by even further in the opening juvenile maiden, skating up to the tune of 11 lengths under Kevin Manning.

“Great attitude, very switched off and has a nice turn of foot,” summed up the rider who nominated the Group Two Debutante Stakes as a possible option next.

“She’s a filly that stays well and travelled very well in behind. We went a nice even pace but when I moved her out and asked her to quicken she did it in a few strides. She was very impressive,” Manning added.

1 Manny Pacquiao’s office confirms Conor McGregor fight
2 Tour de France: Every yellow jersey winner must feel guilty by some association
3 Matt Williams: The sky is not falling in on Irish rugby - but Ireland do need a new plan
4 Kevin Babington: Learning to live again after life changed forever on Long Island
5 Sam Bennett: ‘A green jersey in the Tour de France is such a highlight of my career’
Real news has value SUBSCRIBE