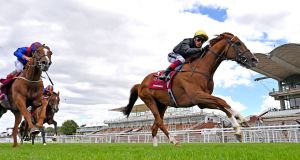 Stradivarius and Frankie Dettori found three lengths in little more than half a furlong to chase down the front-running Nayef Road and secure a record fourth victory in the Group One Goodwood Cup here on Tuesday. Dettori was short of room entering the last of the 16 furlongs but still had more than enough time to overwhelm the leader, with Aidan O’Brien’s Santiago, last month’s Irish Derby winner, only third.

The pre-race betting suggested that it would be a match between Stradivarius, who started at 4-7, and Santiago, the Irish Derby winner and a new opponent for the favourite, at 7-4. Nayef Road got a shrewd ride from Andrea Atzeni, however, and his soft lead gave him a chance to strike for home while Stradivarius was still looking for daylight.

Ryan Moore and Santiago were also a length better off than the favourite as the race reached its climax, but Stradivarius showed a turn of foot more usually seen in a top-class mile-and-a-half horse to power past them both.

The Prix de l’Arc de Triomphe over 12 furlongs looks increasingly like a realistic option for Stradivarius at the end of the season, even though Dettori is expected to be aboard the outstanding Enable in that race as she goes in search of a record third victory. Paddy Power cut Stradivarius to 14-1 (from 20-1) for the showpiece event of the European season after his latest success, the seventh Group One of his career to date.

Dettori told ITV Racing: “What a horse, giving 15lb away. Everybody rode to beat me and he still gets out and wins. What can you say, he’s an amazing horse. What he has done he’s broken records – well done to Bjorn Nielsen, the owner-breeder.

“You go from a superstar like Enable to an absolute champion like this horse in three days. It’s the stuff of dreams. I know I’ve got a good partner and I just had to be patient. When you’ve got good horses the gaps will come. I’ve been in that position before. It’s not nice to be in those positions, but he got out and he won.”

A relieved and delighted Gosden added: “It looked like he was boxed in – which maybe he was – but the key thing when you’re tracking a horse like Santiago, who is in receipt of 15lb, what you must not do is attack two and a half to three furlongs down and turn it into a real slog.

“Nayef Road ran a blinder again right beside us, and I think it was right to wait. When he hits the front now he thinks that’s it. It was a great performance under that weight. It was a big ask for what is not a huge horse – quite the opposite, he’s neat and petite.”

The winning trainer also revealed Stradivarius has booked his ticket to take on illustrious stablemate Enable in this year’s Prix de l’Arc de Triomphe at Longchamp.

He said: “Mr Nielsen and I have discussed it. Weatherbys Hamilton were fantastic putting up two bonuses [for the stayers’ division]. It was great of them to do it – but that has gone now.

“Consequently Mr Nielsen wants to go for the Prix Foy in the middle of September, Arc trial and [then] run him in the Arc.” – Guardian