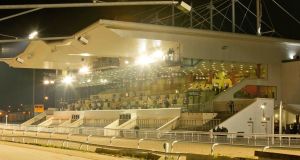 Dundalk racecourse. A new Polytrack won’t be in place until next summer. Photograph: Morgan Treacy/Inpho

Some of Ireland’s top jockeys have given a cautiously positive verdict on Dundalk’s all-weather surface although also adopting a wait-and-see attitude to how it responds through the winter.

The first of 35 meetings scheduled for Dundalk until April took place on Friday night. It was the first fixture since the Spring when there was heavy criticism of the 12 year old Polytrack surface with the Irish Racehorse Trainers Association indicating most of its members had lost confidence in it.

Both trainers and jockeys expressed concern that the artificial track had lost ‘bounce’ and there were incidents of horses reportedly being jarred up after racing on it.

One trainer, Sheila Lavery, said she was boycotting Dundalk over safety concerns.

There were urgent calls during the summer, including from Horse Racing Ireland, for Dundalk’s authorities to begin a resurfacing project, projected to cost almost €3 million, as quickly as possible.

Dundalk’s management did give a green light to putting down a new Polytrack although it won’t take place until next summer in 2020.

So with the autumn and winter season vital for Irish racing as a whole there was renewed focus on Friday night’s action where field sizes looked to hold up and with no incidents reported.

The season’s leading jockey, Colin Keane, rode two winners on Friday’s card and noticed some improvement in the surface from when he was last there.

During the summer over 50 tonnes of fibre was added to the Polytrack, a synthetic surface that also includes rubber, sand and a wax coating.

“To me it rode slow. It’s safe at the moment. That’s because it’s riding slow and it hasn’t probably settled in. But when the winter comes, with rain and frost, and it tightens back up, it mightn’t be the same,” said Keane.

“It’s not what it used to be. When the track was riding well you knew what it was going to be every week whereas last year it would change from week to week,” he added.

Another former champion jockey, Declan McDonogh, had three rides on Friday night and was happier with what he encountered.

“I definitely felt there was a little bit more bounce. There wasn’t that hard-core impact in it when horses galloping that I, for one, felt there was. I think that’s gone out of it and that it was more forgiving. But it remains to be seen how long it lasts.

“On the whole everyone felt the same. Niall McCullagh said there was a bit more bounce. There wasn’t as much kickback either. It had gone almost like a sand track the kickback was so bad. I got back on a few of them but there wasn’t that kickback which is good.

“I suppose it’s trial and error to see how it sustains as a surface. But in the end they will have to change it,” McDonogh said.

In July the Dundalk management confirmed the artificial surface will be replaced next year with work being carried out in April, May and June of 2020.

Earlier in the summer Horse Racing Ireland’s chief executive Brian Kavanagh expressed frustration with the pace of the tendering process and didn’t rule out it being finished by the end of this year.

In other news, the Aga Khan’s smart two year old Sinawann could line up in this Sunday’s Beresford Stakes at the Curragh.

The colt finished runner-up to Mogul at Leopardstown over ‘Irish Champions Weekend’ on what was just his third start.

“He ran a very good race in Leopardstown and seems to have come out of it really well. He holds an entry in the Beresford,” said his trainer Michael Halford.