Romanised could clash with old Rival Circus Maximus at Ascot

Breeders Cup in California ruled out for Ken Condon-trained star 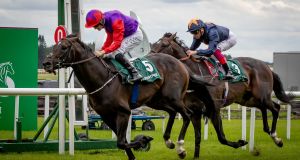 Romanised could get a rematch against his Prix de Moulin conqueror Circus Maximus at Ascot next month.

On Thursday connections of the dual-Group One winner lost their appeal against the controversial Moulin outcome which saw Circus Maximus keep the race in the Longchamp stewards room.

That was despite the winner carrying Romanised significantly across the track in the closing stages and ultimately holding on by just a nose.

Indications from Aidan O’Brien’s team afterwards were that Circus Maximus would go next for Ascot’s Queen Elizabeth II Stakes on Champions Day.

Initial reports suggested that if Romanised was to run again this season it would be in the Breeders Cup Mile in California.

However on Friday his trainer Ken Condon ruled out a US raid in early November after speaking to the racing manager of Romanised’s owner, Hong Kong-based businessman, Robert Ng.

“Mr Ng would not like to look at the Breeders Cup. That has been ruled out. The one remaining race that remains a possibility this season is the QEII.

“The one proviso, aside from the giving all the right signs and being well, is the ground. He would not run on slow ground. If he does run again this season it will be in the QEII,” Condon said.

Romanised is a general 8-1 shot in ante-post betting for the Ascot mile event, a point behind his old rival, with John Gosden’s King Of Comedy a 6-1 favourite.

Condon said Thursday’s appeals decision is the end of the matter as far as the Romanised camp is concerned.

“We’re disappointed but Mr Ng is respects the decision of the stewards and the appeal panel. We’re looking forwards, not backwards, with the horse.

“He stays in training next year and we will look at the Lockinge all being well. If he’s in the same vein of form as this season he will hopefully have a good year and take in similar races.

“He’s very good at a mile, even a turning mile, and he’s won over seven this year in a good time, so it looks his optimum trip,” the Curragh trainer added.

During the summer Romanised ran out an impressive winner of the Prix Jacques Le Marois at Deauville, a top-flight score to add to his surprise Irish Guineas victory in 2018.

1 Ireland Slam England at the Gardens to open up Grand ambitions
2 ‘Manchester United are lucky to have you’: Klopp responds to Donegal schoolboy’s letter
3 Leinster get the job done against Ospreys
4 Six Nations: Ireland v England all you need to know guide
5 Munster break Zebre resistance in second half
Real news has value SUBSCRIBE

Dundalk take the points but Shelbourne pointers are positive 22:24
Munster break Zebre resistance in second half 22:06
Ireland Slam England at the Gardens to open up Grand ambitions 21:56
Connacht come away from Edinburgh with nothing 22:08
Leinster get the job done against Ospreys 21:54
Here is your handy guide to sport on television this week