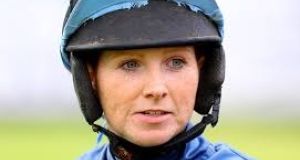 County Dublin-born rider Lisa O’Neill has already landed this season’s Kerry National for Gordon Elliott aboard Wrath Of Titans and could be entrusted with the Cheltenham Festival ride on Tiger Roll in the four-mile National Hunt Chase.

Winner of the 2014 Triumph Hurdle, Tiger Roll has won the Munster National this season and with top amateur Jamie Codd likely to ride the Cheltenham favourite, A Genie In A Bottle, instead Elliott is considering O’Neill for the Festival ride on his stable stalwart.

“If Jamie can’t ride I might let Lisa. She’s been very lucky for Gigginstown and luck goes a long way. She’s only a small thing but is a hardy bit of stuff,” he said.

“It would be some double; a Triumph and the four-miler, from one extreme to the other. Tiger Roll could surprise you any day of the week. You’ll know after two fences if he’s on a going day. If he is, he could run a massive race,” Elliott said.

O’Neill, originally from Garristown, won her first race over fences in no less than September’s Kerry National. She also carried Michael O’Leary’s Gigginstown Stud colours to success at Naas on Sunday when Monbeg Worldwide won a bumper.