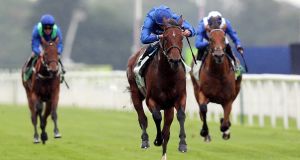 The seventh Irish Champions Weekend will be like no other when staged behind closed doors but it is set to be boosted by the presence of the world’s top-rated racehorse, Ghaiyyath.

Godolphin’s star is one of 13 entries for Saturday’s Irish Champion Stakes at Leopardstown after the latest entry stage.

In a year when Irish flat racing’s showpiece event takes place in the shadow of the coronavirus pandemic Ghaiyyath’s likely appearance represents a timely morale boost.

The two-day extravaganza, featuring half a dozen Group One races between Leopardstown and the Curragh, has seen prizemoney drop by €1 million euro, although it is still worth €3.6 million in all.

Nevertheless the number of overseas entries overall has taken a hit and two of the Group Ones, Saturday’s Coolmore Matron Stakes and Sunday’s Moyglare Stud Stakes, will be all-Irish affairs.

Crucially, however, one likely raider is Ghaiyyath whose official rating was upped to 130 after his latest top-flight victory in last month’s Juddmonte International at York.

That came on the back of defeating Enable in July’s Eclipse while the five-year-old star also landed June’s Coronation Cup.

His trainer Charlie Appleby reported on Tuesday: “Ghaiyyath will work tomorrow morning, we will have a final discussion then, and if everyone is happy our intention is to fly to Dublin on Saturday morning.”

The Government’s easing of isolation rules for jockeys entering and leaving Ireland to ride in Group Ones means Ghaiyyath’s rider William Buick can travel for Champions Weekend.

Buick is also likely to team up with Godolphin’s leading two-year-old Master Of The Seas, the only overseas entry among the 16 left in Sunday’s Goffs National Stakes.

Buick was on board Pinatubo a year ago when that colt put up the top-rated juvenile performance in quarter of a century in the same race.

Another overseas star in the Champion Stakes frame is the French runner Sottsass. His trainer Jean Claude Rouget was successful in the Leopardstown highlight in 2016 with Almanzor.

That was one of seven international victories in a row until Aidan O’Brien brought that streak to an end with a vengeance last year.

Magical led home a Ballydoyle clean-sweep with Magic Wand and Anthony Van Dyck filling the frame. All three are in the running to line up again as O’Brien pursues a ninth win in the race.

It means Saturday’s feature, which has seen a 40 per cent cut in prizemoney to €750,000, presents the prospect of another potential epic clash between European racing’s two heavyweight operations.

Godolphin’s Fantastic Light famously got the better of the Coolmore-owned Galileo in 2001 while a year later Grandera edged out Hawk Wing.

However that was the last of five wins in the Irish Champion Stakes for Sheikh Mohammed’s team.

Magical has three lengths to make up on Ghaiyyath from York but could become just the second horse to win the Champion Stakes back to back. Dylan Thomas managed it in 2006-07.

Ghaiyyath’s stable companion Barney Roy also remains among the 13 but could have an alternative Group One engagement in Germany on Sunday.

That same day the Curragh hosts four top-flight prizes on a card worth almost €1.9 million in all.

Last year’s winner Search For A Song is one of 17 entries left in the €400,000 Comer Group International Irish St Leger.

If she wins back-to-back it will see her trainer Dermot Weld secure a record-equalling ninth win in the race alongside the legendary Vincent O’Brien.

It is the Curragh Cup winner Twilight Payment and the Roger Varian-trained Ebor winner Fujaira Prince who dominate the top of the Leger betting.

Twilight Payment is one of a handful of Joseph O’Brien entries that also include the three-year-old Galileo Chrome. He has an alternative option in Saturday’s Doncaster Leger.

O’Brien’s Thunder Moon is one of two supplementary entries into the National Stakes which sees Master Of The Seas dispute favouritism with Jessica Harrington’s Phoenix Stakes hero Lucky Vega.

It will be a ‘domestic only’ Moyglare which is likely to see a return clash between Pretty Gorgeous and Shale.

The two fillies, trained respectively by Joseph and Donnacha O’Brien, fought out the finish of the Debutante Stakes last month.

Paddy Twomey’s Sonaiyla has been supplemented into the Derrinstown Stud Flying Five and will be up against a strong cross-channel contingent of sprinters.

A total of eight British entries include the course winner A’Ali and Que Amoro, runner-up to Battaash in York’s Nunthorpe Stakes.

With a largely dry outlook for the rest of the week, ground conditions at both Leopardstown and the Curragh are likely to improve.

It is currently ‘good to yielding’ at the Dublin track while it’s ‘yielding’ on the Curragh’s round course and ‘yielding to soft’ on the straight.