Irish Champion Stakes value falls 40% to €750,000 due to impact of coronavirus crisis 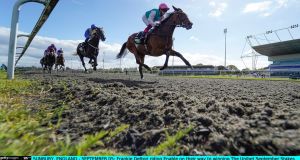 Horse Racing Ireland has estimated that prizemoney for “Irish Champions Weekend” will be a third less than last year’s fund of €4.6 million.

The impact of the coronavirus pandemic on prizemoney has been most apparent at racing’s elite level and it includes this Saturday’s Irish Champion Stakes which has seen a 40 per cent drop in value from €1.25 million to €750,000.

It is one of half a dozen Group One races up for grabs at both Leopardstown and the Curragh this weekend in what will be the seventh renewal of Irish flat racing’s showpiece event.

In the unprecedented context of the Covid-19 crisis, both fixtures will be held behind closed doors.

On Sunday, HRI’s chief executive Brian Kavanagh said that prizemoney will be “roughly two-thirds of last year”. That is a drop of almost €1.5 million.

The Irish Champion Stakes, which had been backed by QIPCO, isn’t being sponsored this year but Kavanagh said that sponsorship levels overall have held up well.

The “Champions Weekend” action takes place alongside both Saturday’s English St Leger and “Arc Trials” day in Paris a day later. Irish racing’s top official has said such a glut of big race action is good for the sport.

In all there are nine Group One races crammed into a single weekend schedule across Europe’s three major racing jurisdiction.

However, Kavanagh rejected any suggestion that Champions Weekend’s profile is affected by such scheduling.

“It’s good that high-quality racing is concentrated so there is a focus throughout Europe.

“It is a sought after date, the traditional Irish Champion Stakes date, and the right date to build Irish Champions Weekend around. I don’t see them [fixtures] in competition. I seem them complementing each other.

“There are logistical issues such as jockeys. But in terms of profiling high-quality racing I don’t see that as an issue. In fact, I see it as a positive,” said Kavanagh who is also chairman of the European Pattern Committee.

The Covid-19 emergency has resulted in the Group One Grand Prix de Paris, normally run in July, switched to Sunday’s Longchamp card where it sits next to the Prix Vermeille. The Group Two Prix Foy is also on that programme which is three weeks out from the Arc festival.

“From a pattern point of view there is no issue. They are all mile and a half races in certain categories. They don’t directly clash with any race in Ireland or the UK programmes.

“The Irish Champion Stakes is a mile and a quarter. The Legers are a mile and six. So from a racing point of view there is not an issue.

The shape of the “Champions Weekend” action is likely to become more clear at Tuesday’s forfeit stage for the two meetings.

Circus Maximus cut out much of the running in the mile event but had no answer to Persian King who held the late challenge of Pinatubo. Both Siskin and Romanised failed to land a blow.

In other news Enable remains on course for a potential record third Arc de Triomphe after her warm up victory at Kempton on Saturday. The John Gosden trained mare won the September Stakes at odds of 1-14.

1 A kick in the teeth for sports, and a nail in the coffin for communities
2 Sam Bennett hoping Tour de France success does not bring celebrity status
3 Why this weekend’s Champions Cup semi-finals are still worth watching
4 Suarez’ Italian language exam rigged according to prosecutors
5 Trump in the rough over playing golf and US Covid-19 fatalities
Real news has value SUBSCRIBE