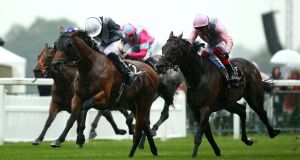 Ryan Moore will be able to take up ride on Circus Maximus after decision to relax quarantine restrictions for jockeys. Photograph: Charlie Crowhurst/Getty Images

Aidan O’Brien’s Circus Maximus will try to become the first ever dual winner of Sunday’s Prix du Moulin but must overcome a superb field to do so. All six runners lining up for Longchamp’s €270,000 mile highlight - due off at 3.25pm Irish-time - are Group One winners.

They include both Ger Lyons’s Siskin and the Ken Condon trained Romanised, who lost out to Circus Maximus in a controversial Moulin finish a year ago.

The majority of onlookers seemed to believe Romanised’s chance had been compromised through being carried left by a drifting Circus Maximus although even an appeal couldn’t change the minds of those who counted in the stewards room.

Both are back for another Moulin, a race with the names of iconic milers like Miesque, Goldikova and Rock Of Gibraltar on its roll of honour but which no horse has ever won more than once. It adds more symmetry to a race where three Irish raiders tackle three Godolphin stars. The Sheikh Mohammed team will pin most of their hopes to Pinatubo, one of a trio of three year olds taking on the older stars.

The Irish Government’s decision to relax quarantine restrictions in relation to coronavirus for jockeys riding in Group One races means Colin Keane and Billy Lee maintain their partnerships with Siskin and Romanised respectively.

It also releases Ryan Moore from his 14 day isolation period. The English jockey is able to team up with O’Brien’s Lope Y Fernandez in Saturday’s Sprint Cup at Haydock before heading to Paris for Circus Maximus. The latter finished just ahead of Siskin when they filled the frame behind the now retired Mohaather in the Sussex Stakes.

Circus Maximus subsequently also had Romanised behind him in last month’s Prix Jacques Le Marois although looked to simply cope better with heavy ground than his old rival on that occasion.

Crucial to setting up what looks like being one of the best races of the season in Europe this year is the prospect of good ground at Longchamp. That has swung the Siskin camp to this Group One prize rather than considering options at next week’s ‘Irish Champions Weekend’ and is good news too for Romanised’s chances of revenge.

It will also be vital to Pinatubo’s chances of proving himself a true top-miler. Considering he was the highest rated two-year-old for quarter of a century, the Godolphin star would have had to be establish himself as an all-time great to fulfil all expectations of him this season.

He hasn’t done that and needed to drop back in trip to win a Group One in the Prix Jean Part during the summer. On Sunday Pinatubo will be ridden by James Doyle for the first time this year and his stamina will be helped by both decent ground and running around a bend.

With Doyle in France, William Buick will be in action at Doncaster next week, an indication perhaps that Godolphin’s star older horse, Ghaiyyath, may line up in next Saturday’s Irish Champion Stakes.

The world’s highest rated horse would be the headline act if he does travel to Leopardstown. A decision is likely after a workout this weekend.

“He’ll do a piece of work on Saturday and after that we will collectively make a call on whether we will let the horse take part in the Irish Champion,” Godolphin’s trainer, Charlie Appleby, reported on Friday.

“The new Horse Racing Ireland protocols have certainly made life easier. We can follow the horse right through to the declaration stage (Thursday) and if we feel he’s fit and ready we can make the call, knowing we have William available to ride,” he added.

Appleby also confirmed that the unbeaten two year old Master Of The Seas will take his chance in Sunday week’s National Stakes at the Curragh.

1 Suarez’ Italian language exam rigged according to prosecutors
2 Born to ride, born to win: Sam Bennett, the making of a green machine
3 A kick in the teeth for sports, and a nail in the coffin for communities
4 Why this weekend’s Champions Cup semi-finals are still worth watching
5 What next for green jersey hero Sam Bennett after toughest of Tours?
Real news has value SUBSCRIBE