Donnacha O’Brien gets off the mark with first training success 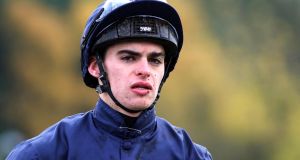 Donnacha O’Brien got off the mark as a trainer on Friday evening as Flower Garland got her head in front at Dundalk.

Sent off the 4-7 favourite in the hands of Gavin Ryan, the daughter of Footstepsinthesand ran out a six-length winner from Camilla Sina in the Irish Stallion Farms EBF Fillies Maiden.

O’Brien, 21, brought his relatively short but highly successful riding career to an end in late November last year, having been crowned champion jockey here in each of the past two seasons.

He said: “It’s nice to get it [first winner] out of the way. She did it well.

“She was entitled to probably win off her mark, but I didn’t think she’d win that well. It’s nice to get it.

“She gets the mile well and I think she’ll probably stay a mile and a quarter as well. She had plenty of experience and was very fit.”

O’Brien rode a total of 10 Group One winners during his time in the saddle, including four Classic victories, aboard Saxon Warrior and Magna Grecia in the 2000 Guineas at Newmarket, Forever Together in the Oaks at Epsom and Latrobe in the Irish Derby at the Curragh.

Appropriately, O’Brien recorded his first winner as a jockey at Dundalk, aboard Quartz for his father, Aidan, in September 2014, when he was just 16 – and sent out his first two runners at the Co Louth venue last month, with Flower Garland having to settle for fifth place on that occasion.

Looking ahead, he said: “I have a few nice horses and it’s nice to get the first one out of the way. I’ve 35 in at the moment. We have a few nice well-bred two-year-olds, the likes of Fancy Blue and a few three-year-olds that haven’t run.

“Hopefully there are a few decent horses there.”