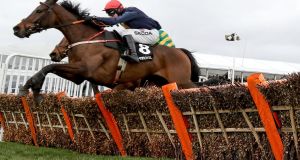 Paisley Park may wind up being the Cheltenham festival’s hottest favourite but Curragh trainer Martin Brassil is still happy for City Island to take him on in the Paddy Power Stayers’ Hurdle.

The horse that gave Brassil his first festival success with a stylish victory in last year’s Ballymore Novice Hurdle has disappointingly fluffed his lines over fences this season.

If expectations were high for City Island’s novice chase career then two starts in less than three weeks dampened them considerably.

Pulled up on his debut at Leopardstown over Christmas, City Island subsequently struggled home second behind Carefully Selected in a Grade Three event at Punchestown.

Shortly after that the decision was taken to revert to flights, a call Brassil is happy with despite the prospect of clashing with the reigning stayers champion at the festival in less than three weeks’ time.

“I’m glad we did. We were waiting all autumn and into Christmas for a bit of nice ground over fences and it never really came until Leopardstown.

“Then he had to go and do it again on soft ground at Punchestown which was a bit quick but we were just running out of time. We were very fortunate last year with the winter we had. We had nearly good ground the whole way through.

“We’re looking forward to Cheltenham again and hopefully the ground will be nearer to good than soft on the day,” Brassil said on Monday.

City Island presents a fresh challenge to the outstanding Paisley Park who is a general 4-6 favourite to retain the Stayers’ crown.

Those odds could constrict even more if Willie Mullins opts to take the Close Mares Hurdle route with Benie Des Dieux while Champ, who City Island beat in last year’s Ballymore, is set to go down the novice chase route.

Nevertheless Brassil is looking at the race as a good opportunity for his stable star who, like Paisley Park, can boast Grade One winning festival form.

“If the favourite wasn’t in it the race it would look very open, as open a race as there is in the festival,” he pointed out.

City Island is a general 12-1 shot in betting for the Stayers.

Brassil, who memorably landed the 2006 Aintree National with Numbersixvalverde, could have two other festival starters next month in Longhouse Poet and You Raised Me Up.

He has finished third in a pair of Grade One contests already this season behind Envoi Allen and Latest Exhibition. Longshouse Poet is also in the Albert Bartlett and been given a handicap entry in the Coral Cup.

“I just decided to stick him in that to see what he gets but at the moment the Ballymore is the preferred option. You Raised Me Up is in the Coral Cup, the County and the Martin Pipe. He’s a 129 here and would probably need to be at least 133 to get into the Coral Cup.

“His first run in a handicap at Leopardstown was a great one [third in the Ladbroke to Thosedaysaregone] so we’ll have to see if he gets in,” Brassil said.

In other news, the state of the ground at Cheltenham will have a major bearing on whether or not JP McManus’s Fakir D’Oudariries renews rivalry with the favourite Notebook in the Racing Post Arkle Trophy.

The Drinmore winner was a length and a half behind Notebook at Leopardstown on St Stephen’s Day but missed out on another clash at the Dublin Racing Festival due to the going.

Bookmakers rate Fakir D’Ooudaries as the main threat to Notebook next month but the five year old has the alternative option of the Marsh Chase over a longer trip.

“He’s in good form and ready to roll. He’s in both races but we’ll leave it until closer to the time to see what the ground is like, how deep or soft it is,” said McManus’s spokesman, Frank Berry.

He also confirmed the high class cross-channel novice Sporting John will be pointed at the Ballymore but no call has been made on where the impressive Newbury winner Chantry House will go.

Powers have opened betting on the official going description for Day One of the festival with ‘soft’ an 8-11 favourite. ‘Heavy’ is only 6-1. McManus is a 2-5 favourite to retain the leading owner award at Cheltenham that he won for the first time in 2019.

Michael O’Leary’s Gigginstown Stud landed the award in its first two years including with seven winners in 2018. However five winners for McManus last year was enough to scoop the prize.

Gigginstown are 6-4 to regain it this time while Rich and Susannah Ricci are 10-1 to upset the duopoly of jump racing’s biggest ownership operations.

1 Sky Sports customers set to save on bills until Premier League returns
2 Gerry Thornley: Changes to tackle laws could transform rugby by time of next World Cup
3 ‘This is sick’ - seventh-tier Swedish club cancels friendly after betting mayhem
4 Jack Grealish needs to show that his remorse is real this time
5 My favourite sporting moment: Phil Mickelson’s miracle shot at the 2010 Masters
Real news has value SUBSCRIBE