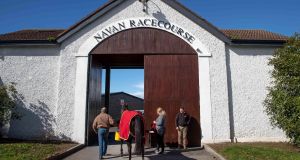 The HRI-owned track at Navan will be the first National Hunt fixture to operate under the new guidelines on Saturday. Photograph: Morgan Treacy/Inpho

Irish racing’s top official has conceded “it will be very painful for the industry” if the ban on public attendance at race meetings goes into the longer term.

All fixtures are closed to the public until at least March 29th on the back of Government advice to try to contain the spread of coronavirus by restricting outdoor gatherings of more than 500 people.

Racing here can continue on the basis of taking place behind closed doors with access to meetings restricted to limited numbers of racing professionals.

Horse Racing Ireland has issued an extensive set of guidelines to racecourses.  They include the requirement for an isolation room for anyone showing symptoms of Covid-19, provision of sanitising services, and contact details being recorded for everyone on admission.

Jockeys’ saunas will be shut and provision for extra space between individuals in weigh-rooms must be made. No catering services will be available.

Access will be limited to essential services such as officials from the Irish Horseracing Regulatory Board, the Order of Malta, racecourse employees, vets and valets.

Only jockeys riding at the meeting can attend and only one trainer and owner per horse running on the day.

Bookmakers cannot attend and no Tote service will operate. An industry starting price will be provided.

The HRI-owned track at Navan will be the first National Hunt fixture to operate under the new guidelines on Saturday. Racing is also due to take place at Limerick on Sunday.

“There are challenges but we think we’re on top of everything. Going ahead like this does protect livelihoods and jobs and that’s the message really. Public health is the priority,” said Navan’s manager, Peter Killeen, on Friday.

Killeen said normally a crowd of up to 2,500 customers would attend Saturday’s meeting which features the Grade Two Webster Cup.

“As we all know that’s what is keeping a lot of the racecourses alive. Plus it also gives people the option of watching and betting from home,” Killeen added.

The current ban on public attendance will apply through the opening of the turf flat season at Naas later this month as well as the first fixture of 2020 at the Curragh.

With TV money assured during this time the financial cost to tracks looks limited for the moment.

However Fairyhouse’s Irish Grand National festival begins on April 11th and would normally expect to attract large crowds. So will the five-day Punchestown festival which is due to take place from April 28th to May 2nd.

The cost to those tracks, as well as smaller racecourses that start to return to action in April, in terms of gate receipts and sponsorships could be significant if restrictions continue past March 29th.

Asked about the potential financial cost to the industry, HRI’s chief executive Brian Kavanagh said such figures are hard estimate when there is uncertainty about how open-ended this unique situation could be.

“Put it this way, they are emergency measures that are sustainable in the short-term but become more difficult the longer it goes on,” he said on Friday.

“We’ve worked with Government institutions to try and keep the show on the road, keep people earning in terms of jockeys earning riding fees, trainers with percentages of prizemoney, that the wheels are still turning.

“But if this goes on long-term it will be very painful for the industry. Like anything if you sacrifice a significant element of your customer base you can only do that short term,” Kavanagh added.

He pointed to the financial impact of the restrictions on bookmakers and Tote staff in particular but also stressed the bigger public health picture.

“Talking to government yesterday there is a concern that employment is protected wherever possible. It was welcomed that we’re able to keep going,” he said.

Kavanagh said a HRI team had been planning for such a contingency for the last 10 days and was able to roll out the new arrangements after consultations with stakeholders.

“Now we need to sit down and reflect on the implications. This is ever-changing. The soccer was going ahead 24 hours ago, then the Arsenal coach turns up positive and changes everything so who knows what’s around the corner.

“The start of the flat at Naas and then the Curragh are within the two and a half week period. The first big one could the Fairyhouse Grand National and then we roll into Punchestown. But we will have to see what happens before then,” he commented.

With other sports shutting down completely due to the threat of Covid-19 racing can at least carry on over the coming weeks.

“But you’d like to see all sports getting going again as soon as possible. It does show how behind the shop window there is an industry that needs to keep ticking over,” Kavanagh added.