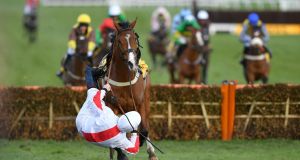 Jockey Jamie Moore is thrown off Goshen after the final fence of the JCB Triumph Hurdle at Cheltenham. Photograph: Dan Mullan/Getty Images

Once again an Irish clean sweep of a Cheltenham programme proved elusive as the English trained 25-1 shot Indefatigable landed the final race of the 2020 festival on Friday.

Mullins’s great rival Gordon Elliott joined him on seven winners for the week when Chosen Mate landed the Grand Annual and add to a 66-1 shock for It Came To Pass in the Foxhunters.

With Irish horses having won the concluding Martin Pipe Hurdle in five of the previous six years hopes were high for a clean sweep to finally occur.

There were half a dozen winners for the visitors on day three in 2018 and on the second day of the 2011 festival. However, once again the final step to a rout proved too much.

On a notable day even by the champion trainer’s standards his luck appeared in from the start as Burning Victory had Triumph Hurdle glory handed to her when Goshen unseated jockey Jamie Moore at the last with victory all but certain.

Monkfish and Paul Townend rallied in the Albert Bartlett Hurdle to edge out two other Irish hopes, Latest Exhibition and Fury Road, with the home favourite Thyme Hill in fourth.

Townend subsequently got a four-day ban for careless riding after allowing Monkfish drift right causing Thyme Hill to be tightened for room.

JP McManus was top owner with Saint Roi in the County Hurdle bringing his haul for the week to seven.

The end of perhaps the most contentious ever Cheltenham festival saw an overall attendance over the four days of 251,684 compared to last year’s record 266,557.

Gold Cup day once again saw the biggest crowd of the week with 68,859 on hand to witness Al Boum Photo’s ‘Blue Riband’ triumph on Friday.

That was down less than two thousand on 2019 despite mounting concern over the coronavirus pandemic.

Despite the festival being finished, and racing now taking place behind closed doors in Ireland due to Covid-19, racing in Britain appears set to continue as normal.

One exception is Monday’s fixture at Kelso due to the Scottish government’s decision to ban outdoor gatherings of more than 500 people, a policy in line with Ireland.

However, a statement from British racing’s industry steering group overseeing Covid-19 said: “British racing continues to be in close contact with the UK government and has been following their advice to continue with business as usual, subject to public health guidance.

“We are aware of the decisions taken by a number of sports today to suspend fixtures in advance of any government decision coming into effect.

“Racing’s leaders are monitoring the situation daily and are currently considering a range of options in this rapidly developing situation. Contingency plans are ready as required.”