Gigginstown put their faith in Walsh as they target ‘Blue Riband’ 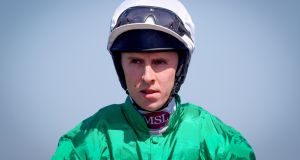 Mark Walsh: has a chance of joining a rare club of riders who can boast both a Gold Cup and a Champion Hurdle on their CV when he partners Delta Work in the Gold Cup at Cheltenham. Photograph: Inpho

A less ancient although admittedly hypothetical proposition would be Munster employing Johnny Sexton as emergency cover for a European Cup rugby game.

Cheltenham’s big race scenario is hardly as outlandish. But it does contain the element of cover. Delta Work’s regular jockey Jack Kennedy cruelly broke his leg in the very next race after the horse cemented his ‘Blue Riband’ claims with a resounding victory in last month’s Irish Gold Cup.

That presented O’Leary’s Gigginstown Stud team with a predicament. They wasted little time deciding the solution was Walsh.

On the same day the booking was confirmed the jockey won a Grade Three event for O’Leary and trainer Gordon Elliott on Run Wild Fred at Punchestown.

Both that rare victory for Walsh in Gigginstown’s maroon colours, and the Gold Cup booking, were consistent with O’Leary’s attitude of employing a ‘best available’ policy when it comes to jockeys.

With Kennedy out, and Davy Russell apparently committed to riding his old ally Presenting Percy, he turned to the man who, day to day, carries the green and gold silks of his biggest rival.

The precise definition of McManus’s riding arrangements are less clear.

If Barry Geraghty appears to be number one, that status seems mostly confined to Britain with Walsh filling the same role in Ireland.

But no one’s saying anything for definite about that, least of all Walsh himself.

McManus and those around him are renowned for their Trappist inclinations when it comes to such public declarations. That suits their 33-year-old jockey down to the ground.

A popular and personable figure among colleagues, publicly Walsh’s inclination appears to be towards an attitude of why say two words when none will do.

Since his boss is fond of repeating the old line about how many fish would still be alive if they kept their mouths shut it’s probably no surprise why they’ve been a firm alliance for so long.

There are certainly no bookmaker blogs, media commitment or any of the usual commercial perks that other top jockey enjoy. Request for interviews are usually politely declined. All of which appears to suit all concerned.

The pay-off for the rider is the pick of some of the best horses in the sport here as well as second dibs on others among the vast McManus empire.

That has allowed him climb to the top echelon of the jockey ranks and Gigginstown are clearly among his admirers.

Walsh might cut an enigmatic figure to the betting public but the pay-off was never better illustrated than last year when McManus’s second-string Espoir D’allen landed the Champion Hurdle.

Inevitably the owner provides most of his big-race ammunition but others have noticed the no-nonsense way Walsh delivers when it counts.

It was Willie Mullins who supplied him a first Cheltenham festival winner with Bleu Berry in the 2018 Coral Cup. A year later owner Sean Mulryan had him on board his Ballymore winner City Island. Now Gigginstown have been quick to snap up his services.

“I wasn’t surprised at all he was picked. He’s a very solid rider, one of the best in the country. He’s very strong, always in the right place and a good horseman too. He sees a good stride. It all goes into an overall package,” says the former champion, and McManus associate, Charlie Swan.

“He’s got a lot of experience in the big races now and that’s what you want when you’re looking for a replacement. You want someone who’s solid and prepared for the pressure. Mark’s a good, sensible fella too.

“I think he’s got a great chance. He [Delta Work] doesn’t want to get there too soon but he has lots of ability and is a good jumper,” he adds.

Given the remarkably successful week McManus has already enjoyed, the lack of a runner in the meeting’s biggest race – a race he’s only ever won once with Synchronised in 2012 – seems even more noteworthy. Geraghty too will sit it out.

Walsh however has a first rate chance of joining a rare club of riders who can boast both a Gold Cup and a Champion Hurdle on their CV. In the context of such a boast the colour of the silks involved are hardly a priority.