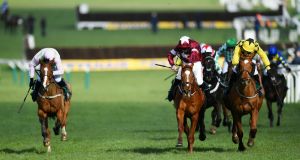 Samcro edged out Melon — and Faugheen — in a thrilling race for the Marsh Novices’ Chase at Cheltenham.

The 2018 Ballymore Novices’ Hurdle winner has had a chequered career since that Festival highlight — but returned to his best in a finish that had just about everything.

The pair battled it out up the famous hill and it could have gone either way, but in the end it was the Gordon Elliott-trained Samcro (4-1) who snatched the verdict on the line under Davy Russell.

Faugheen — with the packed stands willing the 2015 Champion Hurdle hero on — was right behind the first two in third spot, with Mister Fisher fourth.

Sent off the 3-1 favourite, Faugheen was away smartly, but Reserve Tank and Poker Play made the early running before Melon joined the leaders before the fifth fence.

There was early drama when Itchy Feet blundered and unseated Gavin Sheehan at the sixth fence.

Samcro travelled well and there was all to play for until Faugheen made a mistake three out that cost him ground at a crucial time.

It left Samcro and Melon ahead of the pack with the former, wearing the Gigginstown House Stud colours, prevailing by a nose, as Faugheen rallied to be just another length behind.

Elliott said: “Samcro is one of the favourites in the yard. Obviously he was in the doldrums for a while, so to get him back and win a Grade One in Cheltenham is something else. You can see how much it means to everyone in the yard. A lot of people have done a lot of work with this horse — they’ve spent day and night trying to get him right.”

Sire Du Berlais then led home a one-two for Elliott as he recorded back-to-back victories in the Pertemps Network Final Handicap Hurdle.

Continuing a fine Festival for Elliott as well as jockey Barry Geraghty and owner JP McManus, Sire Du Berlais (10-1) was revitalised by wearing blinkers for the first time.

The Storyteller, Sire Du Berlais and Tout Les Permis jumped the last virtually together, and it was the first two from the Elliott stable who pulled away.

Sire Du Berlais, carrying top-weight, got on top close home to land the spoils by half a length. Tout Les Permis was six and half lengths away in third place, with Third Wind fourth and Relegate a never-nearer fifth.

When asked which one he was shouting for, Elliott said: “I didn’t care, both of them ran well and the horses are running out of their skin.”

Min was finally a winner in his fourth Cheltenham Festival when grinding out victory in the Ryanair Chase.

Always in the front rank, the Willie Mullins-trained nine-year-old held the late challenge of Saint Calvados to take Grade One honours under Paul Townend. Min, owned by Rich Ricci, was accompanied by Frodon up front in the early stages until last year’s winner started to lose touch, although he kept going for fourth.

Shattered Love and Aso were others unable to keep pace with Min, who turned up the tempo with Riders Onthe Storm falling three out when trying to get into contention. A Plus Tard laid it down to Min (2-1) from that point, but the 7-4 favourite could not find what was needed from the final fence.

Saint Calvados was the last to challenge but the post came in time for Min, who crossed the line a neck to the good. A Plus Tard was a length and a half back in third.

Mullins said: “He’s been a super horse for us and it’s great he’s had his day here. We used the wrong tactics on him in the Champion Chase last year and it didn’t work out. He likes to be up there, Paul let him do that and here he is again at the top table.”

After going close this week with Rouge Vif (third) in the Arkle and Saint Calvados (second) in the Ryanair, also for owners Kate and Andrew Brooks, Whittington finally graced the winner’s enclosure with Gavin Sheehan in the plate.

Simply The Betts (100-30 favourite) stayed out of trouble in front, together with last year’s winner Siruh Du Lac. In a dramatic race, Royal Village and La Bague Au Roi fell out in the country, while Siruh Du Lac came down two out, bringing down Imperial Presence and hampering several others.

Simply The Betts surrendered the lead to Happy Diva at the last, but fought his way back to the lead to score by a length and a quarter. Mister Whitaker was a length and three-quarters away in third, with Oldgrangewood fourth.

Concertista maintained Willie Mullins’ 100 per cent record in the five runnings of the Daylesford Mares’ Novices’ Hurdle with a wide-margin success.

Just touched off by stablemate Eglantine Du Seuil 12 months ago, Concertista went into this race still a maiden — but put that right in emphatic fashion.

Daryl Jacob brought the six-year-old, owned by Simon Munir and Isaac Souede, with a powerful run in the straight and the 9-2 chance shot past stablemate Dolcita as she and stormed up the hill to win by 12 lengths. Rayna’s World passed a host of rivals on the run-in to grab third place for trainer Phil Kirby and jockey Thomas Dowson at odds of 100-1.

In the final race of day three, Milan Native won the Kim Muir Handicap Chase. It was another win for Gordon Elliott as Kilfilum Cross was edged in the closing stages, Bob Mahler finished third.