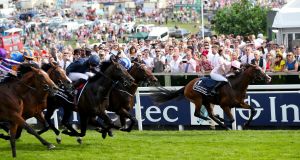 The 46-year-old rider has been a key cog in O’Brien’s Ballydoyle team for over two decades and finally won racing’s ‘Blue Riband’ with a late lunge up the inside that saw Anthony Van Dyck score at 13-2.

A notable career as Ballydoyle’s No 2 rider had previously seen Heffernan finish runner-up in the Derby in both 2009 and 2010 on Fame And Glory and At First Sight.

But this time, on the apparent third-string of O’Brien’s seven runners, he emerged best by half a length from the 10-1 shot Madhmoon.

That horse in turn was a nose and a short head in front of Japan and Broome in a hugely exciting blanket finish that saw the 11-4 favourite Sir Dragonet fade to fifth, with another O’Brien runner Circus Maximus in sixth.

Anthony Van Dyck’s rally up the rail denied a fairytale result for Mahdmoon’s 86-year-old trainer Kevin Prendergast, who came up agonisingly short of a first ever Derby success.

Instead it was O’Brien who eclipsed his legendary Ballydoyle predecessor Vincent O’Brien with a seventh Derby that saw him equal the English trio of trainers, John Porter, Fred Darling and Robert Robson.

The first of O’Brien’s Derby heroes was Galileo in 2001 and it was his latest Classic-winning son who emerged as the 21st Irish trained winner in the 240th renewal of the great race.

Heffernan won a Derby Trial on Galileo and his role as No 2 to legendary riding names such as Kinane, Fallon and Murtagh over the years has seen him reap massive Classic rewards from what they’ve discarded.

It’s a haul that includes eight Irish Classics, among them three Curragh derbies, as well as the 2012 Oaks at Epsom. There’s been Breeders’ Cup glory too on Highland Reel. However Anthony Van Dyck supplied him with the ultimate big-race reward for loyalty.

“I wouldn’t be able to win it if it wasn’t for who I’m with – that’s the bottom line,” said Ballydoyle’s ultimate team-man afterwards.

“I was following Ryan [Moore on Sir Dragonet] who I thought was the biggest danger. It was a big ask for Sir Dragonet on just his third run but mine had danced every dance.

“I’ve been around plenty of Derby winners. I rode his father [Galileo] in a trial and won it. It means a lot to win it.

“I’m always confident riding for Aidan. Anything can happen. It doesn’t matter whether they’re favourite or a big price. He trains them all for the big day,” he added.

For O’Brien, whose son Donnacha was fourth on Broome, it was yet more vindication for his policy of attacking the Derby in strength.

If Anthony Van Dyck was no 40-1 outsider like Wings Of Eagles two years ago, Heffernan’s presence on the winner pointed to another supreme team effort from racing’s dominant operation.

“Séamus has been placed so many times and has worked for us for so long. He’s such a special fellah and has always been a world-class rider. I’m so delighted for him,” he said of the rider he worked with when both were employed by Jim Bolger almost 30 years ago.

“I wasn’t sure [if he would win]. They were all there with a chance and I knew Kevin’s horse was there and I knew he’d be in top shape. He’s a very good horse,” added O’Brien.

Even in his hour of record-equalling glory O’Brien was like many others in acknowledging how Prendergast could have been forgiven for being torn between pride at Madhmoon’s gallant display and intense disappointment at coming up just short.

His legendary father Paddy was twice runner-up in the Derby in the 1960s and stamina doubts about Chris Hayes’s mount proved groundless as the colt battled to the line.

“He’s run a very good race. I would have loved to have won but it was a very good performance. The best horse won on the day,” said Prendergast.

Anthony Van Dyck was immediately installed a 2-1 favourite to complete the Derby double at the Curragh later this month where Ryan Moore could be on board again.

But on the day that counts most it was his understudy who took centre stage.

1 Eamon O’Shea: ‘We spent quite a bit of time talking about older people rather than to older people’
2 Matt Williams: Six Nations must recognise the desire for revolution outside Europe
3 Monica Seles: The warrior queen who could have been the best ever
4 Sport crosses its fingers yet again as ministerial merry-go-round gets another spin
5 Aidan O’Brien targets historic eighth Epsom Derby win with strong hand
Real news has value SUBSCRIBE