Prendergast eyes ‘crowning jewel’ of win for Madhmoon in Derby 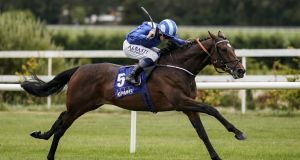 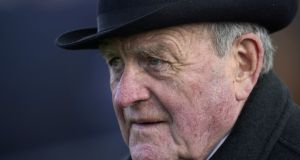 Kevin Prendergast has said victory for Madhmoon in Saturday’s Investec Epsom Derby would represent the “crowning jewel” of his 56-year training career.

The popular 86-year-old Curragh stalwart reported Madhmoon to have come through a Tuesday morning workout with flying colours ahead of this weekend’s 240th renewal of the world’s greatest classic.

“He couldn’t be in better shape and we’re all set to go,” Prendergast said of the colt who goes to Epsom on the back of a fine fourth in the 2,000 Guineas at Newmarket earlier this month.

Saturday’s race will be Madhmoon’s first time racing past a mile and it is that stamina question rather than the prospect of quick ground conditions that is an element of uncertainty for his veteran trainer.

“He seems to have plenty of pace and the main thing is I’d be hoping he gets the trip. There’s no guarantee,” Prendergast said on Tuesday. “But the way he races, when he gets past a mile it’s hard to pull him up. So I’m hopeful he will stay.”

Watering may have to take place at Epsom up to the eve of Derby day in order to maintain a good-to-firm surface although that isn’t a concern for a man who has had a handful of ‘Blue Riband’ runners in the past without making the frame.

“He won the Group Two (Champions Juvenile Stake) at Leopardstown, when he beat Broome, and it was very, very fast ground,” Prendergast said.

“A couple of horses broke down that day. That filly of Jessica Harrington (Alpha Centauri) and Aidan O’Brien’s horse (Saxon Warrior) broke down. It was very fast. But he won very well and came out of it very well. I would think the ground shouldn’t bother him.”

A win for Madhmoon would be a third Derby for his owner, Sheikh Hamdan, after Nashwan 30 years ago and Erhaab in 1995.

However, it would be a hugely evocative moment for Prendergast whose legendary father, Paddy, won every other English classic apart from the Derby during a ground-breaking career.

Near-misses included saddling the second and third, Alcaeus and Kythnos, behind the Lester Piggott-ridden St Paddy in 1960. Five years later, Meadow Court had to settle for the runner-up spot behind the superb Sea Bird.

There is also the prospect of the world’s most-coveted flat race falling to someone who will celebrate his 87th birthday in July although, typically, such an occasion, and its context in the Derby’s long history, isn’t to the forefront of Prendergast’s thinking.

On the topic of age, he joked on Tuesday: “I can’t reverse it – but I’d like to!” As for whether or not a win would make him the Derby’s oldest-ever winning trainer, he added: “I haven’t got into the statistic. But I’d be satisfied if it does happen. It would be the crowning jewel.”

Having taken out a licence in 1963 after assisting his father, Prendergast passed 2,000 career winners almost a decade ago.

This season has proved quieter for Prendergast. He hasn’t had a winner yet from his 36-horse string although he isn’t concerned about that statistic, tracing it back to an altered immunisation programme introduced during the winter on the back of an outbreak of equine flu.

“We had all our horses done at the end of January,” Prendergast said, “and next thing, six or eight weeks later, we had to do them again. It knocked them back to heck.

“They’re coming on now. We’ve taken our time. We don’t have a big string of horses, 35 to 36, so we have to look after them. I think this horse (Madhmoon) is better now than he ever was in his life. If that’s good enough then we have a chance.”

Generous in 1991 was the last horse to win the Derby having finished fourth in the 2,000 Guineas on his previous start, and Madhmoon is a general 14-1 shot to do the same.

Aidan O’Brien is pursuing a record-equalling seventh Derby win on Saturday and his multiple entry has one leading bookmaker quoting the Ballydoyle trainer at just 4-1 to saddle a 1-2-3.

Anthony Van Dyck is one of eight O’Brien entries left in at Epsom but that colt is also among the 20 horses currently left in the French Derby a day later.

The €1.5 million Prix Du Jockey is the most glaring omission from O’Brien’s European classic CV and he has seven left in Sunday’s race.

Norway, Cape Of Good Hope and Sovereign are three others with the option of either going to Epsom or Chantilly.

Wednesday evening’s action at Gowran could see O’Brien’s Oaks contender on Friday, Pink Dogwood, get a form boost from Altair. She was fifth to the Ballydoyle filly in last month’s Salsabil Stakes.