Anapurna and fantastic Frankie deny Pink Dogwood in the Oaks 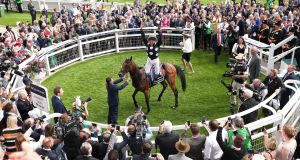 Frankie Dettori steered Anapurna to a thrilling victory in the Investec Oaks at Epsom.

Trainer John Gosden fielded two runners in a bid to win the fillies’ Classic for the third time, with impressive Cheshire Oaks heroine Mehdaayih the 11-4 favourite under Robert Havlin and Anapurna an 8-1 shot after landing the Lingfield Oaks Trial.

While Mehdaayih pulled for her head early on and met significant traffic problems, Dettori always had Anapurna in prime position and although she was under pressure early in the straight, the daughter of Frankel responded admirably to her rider’s urgings.

Aidan O’Brien’s Pink Dogwood displayed an electric turn of foot to grab the lead racing inside the final two furlongs — but Anapurna dug deep and got up to score by a neck.

Pink Dogwood was a clear second, ahead of her stablemate Fleeting in third.

Gosden said: “A brave performance by the filly and brave from the jockey. He found a gap on the inside. Unfortunately our other filly (Meyhdaayih) got nothing but smashed and bumped around everywhere.

“I thought coming past the furlong pole (Ryan) Moore (on Pink Dogwood) had got it, but somehow this filly found the courage of reserves and energy to get her head back in front.

“The last 50 yards are uphill and she basically outstayed the other filly.

“Full marks to both riders and both fillies — two magnificent fillies.”

The victory was a first British Classic for Frankel as a stallion.

“I love the way she fought here, she was passed but put her neck out and fought for it.”

A strong field of nine runners went to post Group One contest, with Gosden’s high-class mare Lah Ti Dar sent off the narrow favourite ahead of Charlie Appleby’s Sheema Classic hero Old Persian and Kew Gardens, who was bidding to prove Aidan O’Brien with a ninth win in the race.

Having been beaten in five previous outings at the highest level, and coming up short in Group Three and Group Two company already this season, Defoe was an 11-1 shot in the hands of Andrea Atzeni, but produced a career-best performance to emerge victorious.

Supporters of Lah Ti Dar would have been concerned some way from out, as she was shuffled back and came under pressure before the home turn.

Ryan Moore produced Kew Gardens from the rear with what looked like a winning run — but no sooner had he hit the front, Defoe charged alongside and got up to score by half a length.

“You dream about results like that,” said Varian, winning the race for the second time after Postponed in 2016.

“We were slow from the gates and didn’t get the handy pitch we were looking for, but maybe that worked in our favour as he had a lovely trip around the inside and of course they fanned out to challenge in the straight and he got a lovely split.

“But still he was good and he quickened up really well.”

He went on: “On his day he has looked like a Group One horse, but his last three or four runs haven’t measured up to his summer form last year. I said beforehand I didn’t think he had ever been better.

“I’m so happy for Sheikh Mohammed Obaid who is a great supporter and has been very patient, and I’m happy for the team at home who are doing a great job. I’m delighted with the result and it is fully deserved for the horse.

“It was a great ride, they always are when they win. One and two are tricky draws around here and history will tell you that from the stats. To watch it I was quite relaxed beforehand, as I thought we could run in the first three or four.

“I said to my wife it was a bit different to when we watched Postponed, as he was an even-money favourite and was expected to win. I was relaxed to start off with, but as the race developed I felt he had a real chance.

He added on plans: “He will certainly get an entry (in the King George) and we will see.”

O’Brien will consider options at Royal Ascot for Kew Gardens.

The Ballydoyle trainer said: “He ran a lovely race and I’m delighted with him really. Ryan was delighted and felt like he ran a great race.

“We will see how he is. He has races at Ascot and we can step him up any time, as we know he stays further.”

Sylvester Kirk was once more proud of Salouen in defeat.

He said: “I was getting excited with a couple to run and he was going better than anything.

“He has run respectably again, he seemed to bump into a couple of good ones again. We will have a little regroup, but the Hardwicke is the one I would like to go to.”