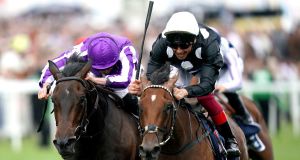 The Epsom Derby’s 239-year history contains a single dead-heat so the odds are that one horse is enough to win which is good news for veteran trainer Kevin Prendergast and anyone who relishes a fairytale result.

Eighty-six-year-old Prendergast runs Madhmoon in Saturday’s 240th renewal of the world’s greatest classic which over the centuries has seen just eight men train the Derby winner from Ireland.

From Orby’s Fred McCabe in 1907, through Vincent O’Brien’s legendary six winners, and onto current titans of the game in Oxx, Weld and Bolger, the elite group constitute some of the greatest names in the sport’s history.

The most statistically successful of all, Aidan O’Brien, can even trump his Ballydoyle predecessor on Saturday with a record-equalling seventh win in the race.

Long-time ante-post favourite Sir Dragonet leads seven O’Brien runners in what is another overwhelming show of strength from an operation not just dominant in Ireland but throughout Europe.

Prendergast is statistically dwarfed in comparison. The man who has produced eight classic winners in his 56-year career – and an English Guineas hero in Nebiollo way back in 1977–- hasn’t even had a winner yet this year from his 36-strong string on the Curragh.

There would be a resonance to the winner of racing’s most coveted prize emerging from such relatively meagre circumstances although it isn’t the most evocative element to Madhmoon’s story.

Perhaps the most notable omission from that list of Irish trainers who’ve achieved Derby glory is Paddy Prendergast. He, along with Vincent O’Brien, transformed the image of Irish flat racing in the 1960s.

A triple British champion trainer, Prendergast won every English classic bar the one he wanted most, the Derby.

His list of seven places include finishing second and third in 1960 with Alcaeus and Kythnos behind the Lester Piggott-ridden St Paddy. Five years later he had Piggott on Meadow Court only to unfortunately bump into no less than Sea Bird.

Now Prendergast’s son, in the twilight of his own fine career, has a shot at adding the family name to a roll of honour that has defined the sport worldwide for centuries.

That Madhmoon has been trading at double-digit odds is perhaps a reflection of O’Brien being long odds-on to become Ireland’s most successful ever Derby trainer. As seventh win will see him emulate legendary names, John Porter, Fred Darling and Robert Robson.

Sir Dragonet is unbeaten in two starts, including a spectacular Chester Vase victory, and is Ryan Moore’s chance to win the race for a third time.

It leaves Broome to be ridden by O’Brien’s son Donnacha. He has already emulated his older brother Joseph by becoming champion jockey in Ireland and a first Derby would see him follow in the same footsteps for what would be an outstanding family double.

Unlike Sir Dragonet, who has appeared to catch the Ballydoyle brains trust off-guard such has been his rate of progress this season, Broome has always appeared a likely Derby contender, following the Ballysax-Derrinstown Trial route taken by both Galileo and High Chaparral.

But if Broome is a leading contender then Madhmoon’s ready defeat of that same colt last year over a mile is one consideration that puts Prendergast’s runner into the mix too.

Another is a fine running-on effort in the Newmarket 2,000 Guineas that brought to mind the old adage about ‘fourth in the Guineas – first in the Derby’.

Both Prendergast and jockey Chris Hayes, ahead of his first Derby ride, have conceded there is no guarantee about the colt properly lasting a mile and a half although it is Guineas pace that will at least help during the race.

In contrast the worry for Ballydoyle mightn’t be stamina but whether or not the running style of both Sir Dragonet and Broome sees them struggle down the hill.

If such a scenario unfolds it would only encourage further hopes of a hugely popular outcome for Prendergast.

Either way O’Brien’s focus will switch on Sunday to the €1.5 million Prix Du Jockey Club at Chantilly where he has three chances to finally break his French Derby duck.

The Irishman has run 36 horses overall in France’s premier classic and Highland Reel’s second in 2015 is the closest he’s got. That horse’s brother Cape Of Good Hope looks the main Ballydoyle hope this time in a 15-runner race due off at 3.25 Irish-time.

A high draw is never an advantage around Chantilly’s extended ten furlongs but Cape Of Good Hope’s stall 13 puts him next to the hot favourite King Persian who’s in 14 so it may not be such a factor this time.

Ryan Moore and Aidan O’Brien will hope for better classic fortune than in Friday’s Oaks at Epsom where Pink Dogwood looked set to win after a devastating sweep down the outside only to be swallowed up in the closing stages by the 8-1 winner Anapurna.

It was a fifth Oaks success for Frankie Dettori who teams up with O’Brien’s Circus Maximus in the Derby.

A similar move down the straight by Moore on Kew Gardens in the Coronation Cup also ended up with the Irish runner being chinned in the final stages by Defoe.