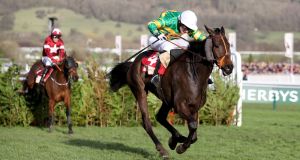 Not many horses can leave a trainer feeling deflated after saddling a Cheltenham double that includes the best young prospect in the sport but Gordon Elliott knows better than anyone how Tiger Roll is different.

The dual-National hero gallantly failed in his attempt to win at the festival for a fifth time when finishing runner up to the French horse Easyland in the Glenfarclas Cross-Country Chase.

Even on a programme where Envoi Allen confirmed he has the racing world at his feet, and Aramax took the Boodles Hurdle, defeat for the sport’s most popular horse was always going to sting.

“You’re always disappointed when you don’t win but I said before the race the ground was a big worry. Keith (Donoghue) said on that tacky ground he was never happy,” Elliott said.

Once again Tiger Roll ran his heart out, the 8-11 favourite ideally placed to attack his French rival over the last half mile. However the final hill looked very long indeed on the soft going.

“Just the ground killed us, no excuse. You’re always hoping but you could see going out on the last circuit across the heavy ground normally he’d be running away at that stage,” Elliott added.

So if day two of Cheltenham turned into something of a ‘Curate’s Egg’ for Elliott there was no disguising how Envoi Allen was the good bit.

If choice is an agony then the team around Envoi Allen are happily convulsed after the hottest winning favourite of the week at Cheltenham lived up to his billing in style.

Keith Donoghue rides Envoi Allen in his homework and reckons the horse is both fast enough, and savvy enough, to have won Tuesday’s Champion Hurdle.

The Ballymore has a pedigree of throwing up future Champion Hurdle winners but Gordon Elliott’s inclination appears to be pointing the former point to pointer towards fences.

Relief appeared to pour out of the trainer after his Ballymore 1-2 with runner up Easywork running a blinder but adhering to the expected pecking order.

“This was the big one for the week. He is the people’s horse and everyone wanted him to win,” he said.

“He stays, he jumps and was bought to be a three-miler chaser. I think that is what he is going to be but we will have to discuss next season with owners,” Elliott added.

Should Envoi Allen go down the chasing route next season he already has the favourite’s tag around his handsome neck for all three Grade One options at the 2021 option.

Davy Russell too was left pondering a seemingly limitless future for the horse.

“He is a hard one to call because when he settles, he switches off the engines and runs in neutral for a lot of the race.

“You don’t know when to pick him there because if you set him alight too early he can do too much. Today was perfect. He is very professional now and when I bent my knees he had plenty left,” he said.

Aramax hadn’t as much to spare in the Boodles Handicap Hurdle but the 15-2 shot had enough to complete Elliott’s double.

“I was very worried about the ground for the winner,” Elliott admitted. “The horses have been flying all week, we’ve got three on the board and plenty of places.”

In contrast it has been a largely frustrating couple of days for Elliott’s great rival Willie Mullins but once again the Weatherbys Champion Bumper proved a safety net.

Mullins secured a 10th win in the race but in the ‘wrong’ market order as the 11-1 shot Ferney Hollow - in the Envoi Allen colours - showed newfound maturity to overhaul the 15-8 favourite, Appreciate It.

Considering Ferney Hollow missed the kick at the start it was an impressive display and a relieved Mullins said: “A hood and much more patient tactics have really helped this horse.”

The first two are likely to clash again in the championship bumper at Punchestown.