Meanwhile, Envoi Allen faces toughest task of his young career in the Ballymore 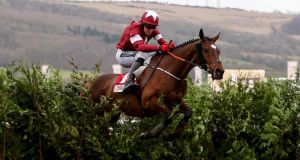 If there’s no disputing Tiger Roll’s status as box office gold at Cheltenham on Wednesday, yet there’s no doubt either about his stable companion Envoi Allen being the precocious starlet.

Unbeaten in seven starts, and with the racing world apparently at his feet, the six-year-old Envoi Allen faces the biggest test of his fledgling career in the opening Ballymore Novices Hurdle.

It has also heralded more than a few false dawns, perhaps none more so than just a couple of years ago with Envoi Allen’s stable companion Samcro.

He too arrived at the Ballymore unbeaten, won it decisively, and had bookies estimating his future in terms of the number of Champion Hurdles and Gold Cups he was going rack up. One win in seven subsequent starts for Samcro serves as a cautionary tale about the dangers of hype, and it’s advice that once again will probably be ignored come 1.30pm on Wednesday.

For such massive physical presence that won a point-to-point, the class Envoi Allen has shown throughout his bumper career and three starts over flights was always going to be enough to have fans dreaming.

Since the excitement surrounding a potential superstar is one of the great joys of the game, only spoilsports might point out that the percentage of them fulfilling that promise is dispiritingly low.

There are other unbeaten hopes lining up against Envoi Allen, and the possibilities for both Sporting John and The Big Breakaway look limitless too.

Then there’s Willie Mullins’s The Big Getaway, whose home reputation is almost as towering as he is.

Yet in terms of long-term potential there’s nothing to compare to the hopes wrapped up in Envoi Allen. If those expectations wind up burst the pop will reverberate around Cheltenham long after the field have pulled up.

In contrast, Tiger Roll has already exceeded expectations to the extent he arrives back at Cheltenham as a genuine phenomenon.

By winning the Triumph Hurdle here back in 2014 the little flat-bred initially more than lived up to his part of the bargain with owner Michael O’Leary. Yet since then Tiger Roll has built up an incomparable CV which makes him undisputedly the sport’s most popular horse.

Obviously much of that is due to back-to-back Grand National victories, although victory on Wednesday will be a fifth festival success here, an astounding achievement in itself.

Gordon Elliott insists the official rating Tiger Roll has earned around the marathon test in the last two years would be unrealistic if he pitched him into top Gold Cup company. However there isn’t a horse lining up in Friday’s “Blue Riband” that could be confidently backed to beat Tiger Roll in the Cross-Country’s specific circumstances.

That indicates the task facing rivals such as JP McManus’s pair Easyland and Yanworth.

The task involved in facing off against Willie Mullins in the Weatherbys Champion Bumper won’t be lost on any of his rivals.

He has three shots at winning the race for a tenth time, although there’s little disputing Appreciate It looks to be the biggest round of the trio. The stamina that is always important off a punishing pace up the final hill has been take as read for this point-to-point winner.

Yet what has caught even Mullins off-guard is the pace Appreciate It has shown in two wins around Leopardstown, particularly over two miles at the Dublin Racing Festival.

How impressive that was is reflected in a wincingly tight price in the market and a value alternative to shake up the favourite could be Queens Brook.

Gordon Elliott is also triple-handed, including with another mare in Gigginstown’s Darling Daughter.

In the last three years both Fayonagh and Relegate have made winning use of the 7lb sex allowance in this race. The Gowran winner Queens Brook may do the same.

Mullins also has a trio in Wednesday’s other Grade One, the RSA, with Allaho the apparent first-string. He is among the favourites with Champ and Minella Indo after winning the second of his two chase starts in a canter.

Considering Allaho was beaten by his stable companion Easy Game on their chasing debuts at Christmas, the latter looks overpriced at over twice the odds.

Easy Game’s own second run over fences saw him press no less than Faugheen all the way in a Grade One and he shapes like a first step up to three miles will suit well.

JP McManus has five chances in the Coral Cup, including his recent purchase Alfa Mix. The mare Dame de Compagnie will have just her seventh start here, but is a course winner with the potential to still be significantly ahead of the handicapper.

Whether the same can be said for McManus’s Aramax in the Boodles Juvenile Hurdle is debatable. He won well at Naas, but hardly well enough to be half the price of Nicky Henderson’s impressive dual-Sandown winner Palladium. A guaranteed fast face should suit him well.

1 Next stop the Champs-Elysées in green for Sam Bennett
2 Saracens’ emphatic opening salvo enough to keep Leinster at bay
3 Born to ride, born to win: Sam Bennett, the making of a green machine
4 Lance Armstrong’s latest move serving him well on many fronts
5 Saracens deliver the brutal blueprint on how to beat Leinster
Real news has value SUBSCRIBE