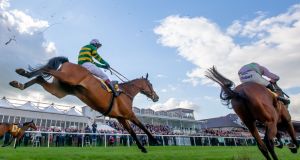 For the previous four years it’s been possible to set your watch by Altior. He turns up at the festival and wins.

A rogue splint problem, however, has ruled Altior out leaving the two-mile championship up for grabs. A race billed as a triple-heavyweight clash with Defi Du Seuil and Ireland’s Chacun Pour Soi now shapes as a likely head-to-head. Victory for either will be significant.

The latter’s trainer, Willie Mullins, filled in the glaring Gold Cup gap in his CV last year. Shortly afterwards he secured an elusive Irish Grand National at Fairyhouse. All that remains among the major pots of the National Hunt game is the two-mile crown.

Considering he saddled Douvan in the race three years ago when the 2-9 favourite couldn’t even make the frame, Mullins won’t take anything for granted here.

But considering also how sparing he is in talking horses up it is hard to ignore how effusive Mullins continues to be about Chacun Pour Soi.

A run of niggling problems meant glimpses of brilliance the horse provided at home couldn’t be tested on the track until this time last year with a sauntering success in a bad race at Naas.

That Chacun Pour Soi could jump from that straight to a spectacular Grade One victory over Dei Du Seuil at Punchestown suggested he might be the one to finally break his trainer’s duck in Cheltenham’s Day Two feature.

A couple of runs this winter have dented that belief somewhat. Getting beaten by A Plus Tard on his return to action during Christmas was no disgrace. But neither did it smack of a potential superstar as his reputation suggested.

Even his victory over Min at the Dublin Racing Festival didn’t convince everyone, although once again it had connections purring.

“It will be Chacun’s first run at Cheltenham so we don’t know how he’s going to handle it but it shouldn’t be a worry,” jockey Paul Townend said. “From riding against Defi Du Seuil on Un De Sceaux earlier in the season I’m very happy to be taking him on with Chacun.”

Just what Defi Du Seuil achieved in twice beating Un De Sceaux this season will be pored over on the run up to this race. There was a neck between the pair in December’s Tingle Creek at Sandown. That stretched to almost three lengths the following month in Ascot’s Clarence House.

Admittedly ‘Defi’ won easily but the tactics employed on Un De Sceaux were odd and at 12-years-old the now retired star was on the down slope in terms of his best form.

Nevertheless, the crucial factor here may be form over this course. Chacun Pour Soi might thrive around Cheltenham but we don’t know for definite whereas we do with his big rival.

Defi Du Seuil has been beaten just once in seven starts around Cheltenham. That includes a pair of festival victories in the Triumph Hurdle and last year’s JLT. On almost every occasion his most potent weapon has been a devastating burst in the closing stages.

Such moves don’t translate into wide winning margins that sparkle in form terms but they can be devastating.

It’s also worth bearing in mind how the one time the English runner has faced his Irish rival came at last season’s Punchestown festival.

Chacun Pour Soi came into that a fresh horse. Defi Du Seuil had run five times that season including at Cheltenham. He was entitled to be feeling the effects of that campaign.

Should ‘Defi’ win today he will fill in the one major Cheltenham festival blank for JP McManus.

The Irish owner has never really had a top-notch two-mile star over all the years he has been coming here. It now looks like he has. Now it’s over to Defi Du Seuil to break new ground and prove himself.