On Tuesday roads, bars and cafes were busy, suggesting the crowd will be considerable 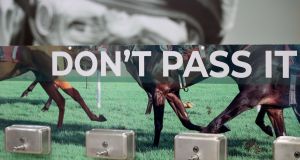 Tens of thousands of people are flocking to day one of the Cheltenham festival as organisers oversee a raft of special measures to try to keep visitors and staff safe from the coronavirus.

Last-minute ticket sales have not been strong and some people have asked for refunds because of the outbreak, but on Tuesday morning local roads, bars and cafes were busy, suggesting the crowd will be considerable.

Ian Renton, a regional director for the Jockey Club, said: “We’ve been liaising very closely with government over the last fortnight and they have been extremely helpful in keeping us informed of their views and advice. We were very pleased to hear from the culture secretary yesterday saying that they wish to see business as usual, which allows events such as this to continue.”

There have been three cases of coronavirus in Gloucestershire, including one in the Cheltenham area.

Asked if it would have been wiser to call off the event, Renton said: “We have to listen to the advice of the government. We shouldn’t be making our own decisions on this. We will put everything in place for racegoers to make sure precautions are here.

“We’ve asked all racegoers who are coming to follow the government guidelines and if they should be self-isolating they should self-isolate and not come racing.”

Renton said some people had asked for a refund, while others had initially done so before changing their minds and deciding to attend. “This is a very important week for racing and for the country,” he said. “We want to ensure all our racegoers have a great four days of sport.”

The festival is setting up additional toilets and hand-washing facilities, and extra staff will operate in all toilet areas to ensure soap and drying facilities are constantly available. Twenty-four hand sanitiser boards have been set up around the course.

Renton said there was no sign that the number of Irish visitors had dropped off significantly. Thirty extra flights are put on by Ryanair on the Dublin to Birmingham route during the festival.

A huge number of people will be jammed together not only at the course but on the way to it. Last year more than 130,000 people used Cheltenham Spa train station over the four days and 80,000 travelled in the shuttle bus service between the town centre and racecourse. Fifty staff coaches a day from as far afield as London, Swansea and Coventry converge on the site.

Any large fall in numbers would be a blow to the area, as the event is worth £100m to the local economy. A record-breaking total of 266,000 people attended the four-day event in Gloucestershire last year.

Special measures have been put in place to take away anybody who is suspected of coming down with the coronavirus during the event.

What happens at Cheltenham is bound to inform the government’s thinking about other sporting events including next month’s Grand National at Aintree.

Sarah Scott, Gloucestershire’s director of public health, said: “We have provided advice and support to the organisers of the Cheltenham festival, focused around the importance of promoting good personal hygiene to racegoers.

“I understand they have put a range of appropriate measures in place. Good hygiene remains the best prevention and there are some simple steps everyone can take to protect themselves.”

Aaron Rai keeps the heat on as Irish big names frozen out at Galgorm Castle 20:49
Weekend Premier League team news, kick-off times and TV details 20:21
Mark Power finds his driving form in the nick of time to make the weekend 20:21
Ryan Mullen best of the Irish during World Championships time-trial at Imola 18:35
Saracens plan to ‘relish’ Champions Cup campaign before relegation 18:20
Here is your handy guide to sport on television this week