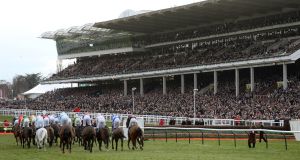 Running the Cheltenham Festival behind closed doors is preferable to postponement should the coronavirus threat impact on next week’s action according to Gigginstown Stud’s Eddie O’Leary.

Fingers are tightly crossed on both sides of the Irish Sea that the Covid-19 situation doesn’t escalate over the weekend ahead of Tuesday’s opening to the biggest race meeting of the year.

Betting suggests it is odds-on to go ahead with the bulk of up to 15,000 people still expected to travel from Ireland.

That is despite advice from Cheltenham’s authorities not to travel if experiencing symptoms such as coughing or shortness of breath.

Newbridge Travel is an established tour operator for the Cheltenham Festival and a spokeswoman said on Friday that coronavirus has not led to cancellations.

“Anyone who has booked with us hasn’t cancelled. The one impact it would have had is that the week before you usually get people ringing up asking what a day trip would cost. We don’t have any of that. But other than that it hasn’t impacted so far anyway,” said Catherine Myler.

Ryanair boss Michael O’Leary’s Gigginstown Stud team have more at stake than most with a large string of horses set to travel, including one of the favourites for Friday’s Gold Cup, Delta Work.

The transport of horses across the Irish Sea is getting under way with a vengeance this weekend and in a context where the British government is moving towards a ‘delay’ phase of protecting against the virus.

In theory that could see steps towards reducing large-scale gatherings such as race meetings and football matches.

Serie A football games are being played closed doors in Italy while race meetings have continued in both Japan and Hong Kong in recent weeks despite significant numbers of coronavirus infections there.

French racing authorities have also run meetings with only professionals involved in the sport allowed attend.

On Friday Eddie O’Leary repeated his belief that a similar move would be preferable to postponement should any spike in cases of Covid-19 cases occur and prompt last-minute doubt on next week’s action going ahead.

“This thing could go on for months, so when you do you delay it until? A delay might mean July when all the horses are out in a field and everything is gone,” he said.

“If the choice is an unknown delay or behind closed doors, absolutely go closed doors. But in case of closed doors, who compensates the BHA [British Horseracing Authority] for losses? I assume the government do, but I don’t know,” he added.

Last week the BHA revealed that contingency plans are in place in case Cheltenham needs to be postponed but gave no details. They have also not commented on the possibility of racing taking place behind closed doors.

If betting suggests Cheltenham may go ahead the same can’t be said for other prestigious fixtures later in the calendar, such as the Aintree Grand National on April 4th.

Gigginstown star Tiger Roll has a historic Grand National in his sights but before that is due to line up at Cheltenham on Wednesday in the Glenfarclas Cross-Country Chase.

The response to coronavirus generally was described by Eddie O’Leary on Friday as a “media-driven overreaction” and suggested that cancelling large-scale gatherings such as sports events would be premature.

“If something should go first, then public transport should go first. It’s all shared air, buses and trains,” he said before stressing the seriousness of the matter for the elderly and those suffering from chronic obstructive pulmonary disease.

However he added: “In the scheme of everything else, where 25,000 people worldwide died from cancer yesterday, and 4,000 from TB, it’s very sad, but it’s flu.”

1 Saracens’ emphatic opening salvo enough to keep Leinster at bay
2 Next stop the Champs-Elysées in green for Sam Bennett
3 Born to ride, born to win: Sam Bennett, the making of a green machine
4 Maro Itoje proves he has no peer in the northern hemisphere
5 Saracens deliver the brutal blueprint on how to beat Leinster
Real news has value SUBSCRIBE