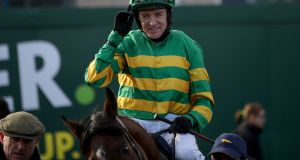 Barry Geraghty: “I’d love to win it again. Even as a kid watching it was always a race that excited me.” Photograph: Bryan Keane/Inpho

Barry Geraghty remembers when he reckoned Defi Du Seuil had the potential to be the real two-mile deal.

Defi Du Seuil beat a Gold Cup contender, Lostintranslation, in last year’s JLT at the festival over an extended 2½ miles.

At the start of this season there was speculation about the horse being upped to three miles for the King George.

The distance gamut suggests a versatile talent, but the decision was nevertheless taken to give the horse a first test of this season over the minimum trip in November’s Shloer Chase back at Cheltenham.

“I remember at the second last that day I’d no room. I was outside the wings. To go in on the next stride we would land uncompetitively. So I said ‘go on’ and he took the chance,” Geraghty recalls.

Taking chances is what top horses running over the shortest distance at the fastest pace have to do, Geraghty reckons. He should know.

A sixth victory on Wednesday in the Queen Mother Champion Chase will see him out on his own as the most successful jockey in the history of the two-mile championship. Currently he shares the honour with Arkle’s rider Pat Taaffe. He collected five between 1960 and 1970, including on the legendary Flyingbolt in 1966.

Geraghty’s haul includes two of the greatest two-mile heroes of the modern era in Moscow Flyer, twice a winner in 2003 and 2005, and the spectacular Sprinter Sacre in 2013.

Throw in Big Zeb (2010) and Finian’s Rainbow a couple of years afterwards and there’s no one better qualified to assess what’s needed to win the day two feature.

“The biggest thing they need is bottle. Jumping at pace, and if they need to take a chance at a fence at any stage, for that not to affect their approach to the next one. That’s important.

“So you need a lad who’s on the edge, who’ll take chances. That’s what they all had in common. Big Zeb and Moscow Flyer would have had a chequered time of it with letters in their form figures. But that’s what you need – a fella willing to take chances.”

What can help a horse do just that is confidence fizzing down the reins from the human on top.

Colleagues such as Davy Russell believe it is no coincidence that Geraghty’s Champion Chase record is peerless among modern riders. When it comes to the unique telepathy of horse and jockey there’s never been anyone better at transmitting belief when the margin between triumph and disaster is at its narrowest.

Geraghty is 40 now, still at the top of the game, and still excited at the competing on the biggest stage of all. He began this week on 38 career festival winners, easily the best record of current riders.

“I did an interview recently and it was said to me wouldn’t 40 be great to get to, and I said wouldn’t it be better to get to 45!” he laughs. “There’s an element of greed. We all want as much as we can.”

The Co Meath man is famously laid back when it comes to the pressure of the big occasion. However, time has made him appreciative of a landmark like holding the Champion Chase record on his own.

If it is the sole major contest that jump racing’s biggest owner has never won, his jockey has experienced almost every emotion the race could throw at him.

The year between Moscow Flyer’s two wins saw him eject Geraghty with a blunder at the top of the hill.

If Sprinter Sacre’s spectacular defeat of Sizing Europe looks like being the benchmark two-mile performance for years to come, his stable companion Finian’s Rainbow beat the same rival in a barging match that saw both forced to swerve around the final fence due to it being dolled off.

“I was jumping the last. The way the markers were set up it was avoid the inside half of the fence. Give someone a second and a half to make that decision and my decision would have been to jump it. It was a bigger call for me to bypass it. That was a bizarre one,” he recalls.

“Moscow only ever did as much as he had to, so he always had plenty left in the tank. Sprinter’s performances were big ones, like when he won the Game Spirit as a novice, or that day he won. He was something else.”

Geraghty is reluctant to compare the two horses, and is aware that for all his promise Defi Du Seuil still has to go and do it when it counts, even in a race shorn of its reigning title-holder Altior.

“Defi has proved he can go further. Chacun Pour Soi as an individual looks like he’ll stay. He’s a big hardy individual. There’s no real chinks in any of their armour, which makes the race I think.”

1 Next stop the Champs-Elysées in green for Sam Bennett
2 Born to ride, born to win: Sam Bennett, the making of a green machine
3 Let’s face it, Saracens don’t really care that they are rugby’s most hated team
4 Donegal footballer tests positive for Covid-19 forcing squad into isolation
5 Leinster look ready to step things up and burn off Saracens challenge
Real news has value SUBSCRIBE

Superior Germans get job done to take top spot from Ireland 16:33
Next stop the Champs-Elysées in green for Sam Bennett 16:07
Donegal footballer tests positive for Covid-19 forcing squad into isolation 15:30
Everton come from behind to put five past spirited Baggies 14:57
Aston Villa sign ‘immense talent’ Bertrand Traore from Lyon 11:48
Here is your handy guide to sport on television this week